Over 700 foreigners barred from entering PH in July – BI 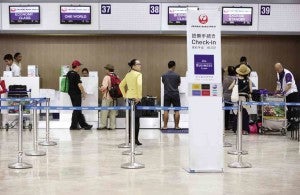 MANILA — For failing to justify their travel to the country, more than 700 foreigners were turned away in July as part of the Bureau of Immigration’s drive against undesirable aliens.

The BI said most of those barred from entering the Philippines were Chinese tourists, while the rest were from other Asian countries.

In July, 720 aliens were not allowed to enter the Ninoy Aquino International Airport and other ports of entry due to their inability to explain the purpose of their visit.

BI commissioner Jaime Morente explained that the foreigners who were turned away “were likely to become public charges.”

Also refused entry to the Philippines were aliens who were improperly documented and those on the agency’s derogatory list.

“Under immigration laws, a foreigner is a public charge if his presence here would constitute a burden to the state, thus he is deemed undesirable and therefore excludable,” Morente said.

The turning away of such foreigners is part of the BI’s intensified campaign to prevent undesirable aliens from coming to the Philippines.

Immigration officers have the discretion to order the exclusion of an arriving foreigner if he cannot satisfactorily answer questions on his travel itinerary, intended length of stay and reasons for travelling to the country.

Morente said the foreigners were immediately booked on the first available flight to their port of origin, after which they were included on the BI’s blacklist.

The BI will be tapping six Chinese-speaking interpreters to be deployed in international airports to help the immigration officers communicate better with Chinese tourists.

BI spokesperson Antonette Mangrobang explained that this was due to the fact that most of the excluded foreigners were Chinese nationals.

“This is to totally eradicate the possibility that aliens are excluded simply because our officers failed to understand the response of the passenger,” she said.

Meanwhile, the BI has submitted a proposal to Justice Secretary Vitaliano Aguirre to implement an Advance Passenger Information System.

This will require all incoming and departing aircrafts to submit to the BI an advance copy of their passenger manifests.

Mangrobang said this was in line with President Duterte’s directive to expedite and improve frontline government services.

“This will enable us to screen, vet and pre-clear international travelers prior to their arrival and departure, thus resulting in speedy immigration processing and reduced queuing time at our immigration counters,” the BI spokesperson added.  SFM/rga