These girls learn the culture of their home country at a very young age through dance and performing at events like the Pistahan. JUN NUCUM

SAN FRANCISCO – Thousands of Filipinos from surrounding Bay Area cities joined contending politicians Filipinos and non-Filipino alike, a non-Filipina beauty queen, a Filipino contingent from Canada and even a visiting softball team from the Motherland to make the 23rd Pistahan at Yerba Buena Garden the most diverse in attendance yet. 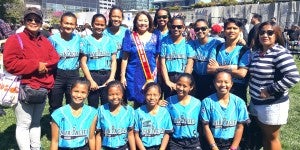 Hermana Mayor Sonia Delen (center in terno) joins the members of the Bonifacio High School softball team from Makati, which participated in the World Series in Delaware after winning the Asia Pacific Championship in Singapore. JUN NUCUM

Philippine Consul General to San Francisco Henry Bensurto Jr. and family and his consulate staff welcomed contingents of Filipino business, socio-cultural and other nonprofit groups from as far as the Canada and the Philippine softball team Asia-Pacific champion team from Makati. 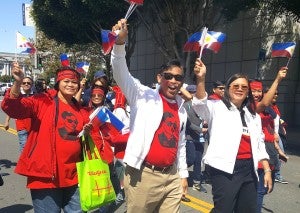 Consul-General Henry Bensurto (middle) and wife, Mariz, (in white jacket) lead the delegation from the Philippine Consulate General in San Francisco in the parade. JUN NUCUM

Delen explained that the festival theme Journey to the Heart SoMa Pilipinas was inspired by the long and hard struggle for a Filipino Town in San Francisco. he San Francisco Board of Supervisors recently approved, unanimously, the establishment of the special district.

“Chris and I are very honored to be the Hermano and Hermana Mayor for the 23rd Pistahan, the largest festival in the United States, and it’s so wonderful to see the kababayans together and to lift the spirits of everybody and to celebrate SoMA Pilipinas,” Delen gushed.

The Filipino Channel float, with stars (left to right) Erich Gonzales and Daniel Matsunaga with newscaster Hennie Espinosa (second from right), was one of the most popular in the parade. JUN NUCUM

“With Pistahan, we sure did not leave our happy Filipino tradition of fiesta celebration, we even brought it here including dances with the colorful costumes which are all amazing coming from the Philippines,” Delen gleefully added.

Wiener congratulated Filipino leaders for the Pistahan especially Filipino Americans Arts Exposition (FAAE) Chairperson Al Perez, and for “the amazing Filipino community that contributed so much to San Francisco and to the Bay Area.” 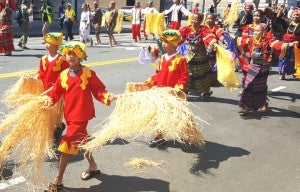 Young children brave the long route of the parade and give their all in performing Filipino cultural dances as they march to the event site in Yerba Buena Garden. JUN NUCUM

“After the tirades of Donald Trump saying horrible things about Filipinos, it is good and appropriate that we embrace our Filipino community including the immigrant community,” Weiner stated.

Rival Jane Kim recalled that she had worked together with Filipinos for many years. “I was a community organizer, a school board member, and now as a supervisor, I’m proud to represent one of the largest Filipino American communities here in the Bay Area. And I am also proud to work with the community to launch the first Filipino socio-cultural heritage district.” 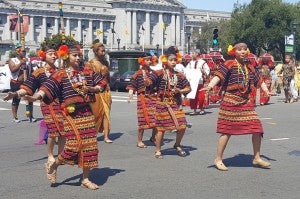 State Senator Mark Leno declared, “It is important for me to be here. Stay strong stay committed; we’ve got diversity.”

Assemblymember Phil Ting described Pistahan as “always a fabulous celebration of our Filipino culture, which had a huge influence in the Bay Area that really has help build California. It is important for us to remember to celebrate our community and all our accomplishments because oftentimes we don’t get recognized in history.”

WATCH: 23rd Pistahan in San Francisco. VIC VALBUENA BARENG
Daly City council member David Canepa came to “”show my pride. It is most important for me to be here because it is a celebration of one of the greatest cultures in the world. People are awesome. I grew up with Filipino cousins.”

Canepa’s rival for position of Supervisor of San Mateo County’s 5th district Filipino American Mike Guingona “happy to see the way [Pistahan] has grown. Any chance we can to celebrate our Filipino heritage with everybody else is always a great opportunity.” 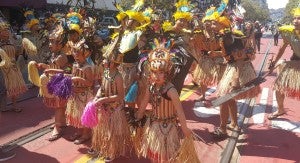 Very young children performers of Philippine Barangay Performing Arts Society based in Edmonton, Alberta, Canada are raring to dance again after a break in the parade that got stalled along the way. JUN NUCUM

At the afternoon program on stage, Ashley Cheng from Mayor Ed Lee’s Office of Neighborhood Services [MONS], presented a proclamation from the city and county of San Francisco making August 13 and 14 Pistahan parade and festival weekend.

Lone Fil-Am State Assemblymember Rob Bonta declared, “I am particularly proud to celebrate with our community.”

Bonta pitched for Mae Cendaña Torlakson of Contra Costa and Sonoma county and Todd Gloria of San Diego who are running for State Assembly seats. 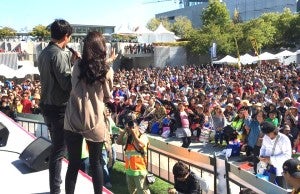 Celebrity couple Daniel Matsunaga and Erich Gonzales wave to the crowd who came to watch them perform in the main show of the 23rd Pistahan. JUN NUCUM

Bonta also denounced Donald Trump, saying, “If some presidential candidate utters harsh words against Filipinos, calling them animals and vowing to ban their immigration and tourism to the U.S. in a sweeping, irresponsible, manner, we should stand up and say, ‘No, enough is enough.’ We are 1.5 million Filipinos in California but we under-represent ourselves regularly. We don’t have the voice that we deserve. We should have more influence and we do that by engaging more. And we are stronger when we are together.”

Cendaña-Torlakson, who hails from Mandaluyong City, recalled that she “used to come here with my kids when it just started, but now my kids are all grown up so this is just family to me seeing people here enjoying being part of our culture. It is so important for me to be here to celebrate our heritage in the biggest Filipino festival in Northern America so I am so proud to be here.”