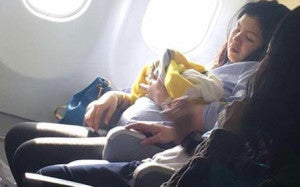 SAN FRANCISCO — A Dubai-Manila flight of Cebu Pacific Air had to make an emergency landing at Hyderabad airport because a 36-year-old Filipino woman delivered a baby on board.

The Cebu Pacific Air flight was passing through Indian airspace while on its way to Manila when the medical emergency occurred, according to a report by India’s IANS news agency.

The flight continued on after the woman and the newborn baby girl were transferred to Apollo Cradle Hospital in the city.

A source said it was a premature delivery. The mother was stable but the infant was suffering from jaundice.

The name of the woman was withheld by the airline and the hospital. But one of the passengers on the flight, Missy Berberabe Umandal, posted a picture on Facebook of the woman and the newborn.

Umandal said the woman was surprised because the delivery was due in October. Two nurses who were among the passengers came to help.

“The flight attendants took a shelf from the cabinets and filled it with mineral water, which became a makeshift wash basin to clean the baby in,” she reported.

“We only heard one semi-loud screech, and a few seconds later, there were tinier, cute screeches, and it was when we knew the baby was born, Umandal posted.

Umandal said the girl was lucky as she will get free travel for life for being born on a Cebu Pacific flight.