Hope for miracle keeps Filipina in Canada strong despite cancer 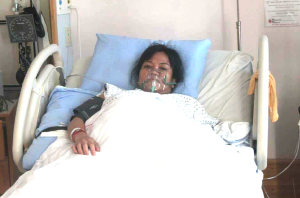 RED DEER, Alberta – A Filipina mother is pinning her hopes on a miracle after being diagnosed with stage-four breast cancer. Her community in St. Albert is rallying behind her, giving spiritual and material support.

At the end of June, as the summer season swept across Canada, Eloisa Gabonada, 43, and her family were packing to join their friends on a yearly camping trip to the mountain resort of Banff, Alberta, some 433 km away from where they live in St. Albert, north of Edmonton City.

But on the night before the trip Eloisa felt a dull, achy pain in her hips. The pain was so excruciating it drained her strength. Known to shun medical treatments of any sort, she fought the pain head-on until midnight when she prayed to God to care for her as she entered a nearby hospital’s emergency department.

Once in the ER she got relief from a cortisone shot. She could have returned home, but her husband, Emerson, 33, urged her to inform the doctor about the tumor in her breast.

Although the couple had known about Eloisa’s breast tumor since 2014, the news still came as a shock that the mother of four would not be receiving any aggressive treatments.

“The doctors said it is incurable,” said Eloisa. It has spread to her lungs, neck and hips — it was stage-four cancer. An oncologist suggested radiation therapy to burn and shrink the malignant cells to prevent further spread, but nothing else.

“I wish it was only a nightmare that you could wake up from the following day, but it wasn’t,” said Emerson.

Eloisa first felt the lump in her left breast while she was pregnant with their youngest in 2013. She did not pay much attention to it, thinking it had been brought on by pregnancy hormones. The lump felt like a nut seed, she said.

Her prenatal tests then all came back clear. She recalls that a few months after giving birth, she was bleeding heavily for two weeks she had to use a diaper. A biopsy of her cervix did not reveal anything remarkable.

Back in St. Albert, when her youngest had turned a year old, the lump became more pronounced. Not wanting to alarm her family, she visited the Philippines in February 2014 to attend a wedding and, at the same time, seek medical attention.

It was confirmed at St. Luke’s Hospital in Manila that the lump was a tumor and it had to be treated aggressively.

Another doctor in Manila advised her surgical intervention at a cost of P110, 000 (C$3,055). She refused because she could have the procedure done in Canada for free on her return.

She recalls an oncologist at St. Luke’s who showed her the mammogram and gave her a pat on the back, revealing that its size then was 3.5 cm. She was told she had stage-3 breast cancer.

“Yung feeling na manlalambot ka na, magdadrama ka na, magda-dialogue ka (I felt weak, emotional, started talking [to myself]” she says. “But there must be a reason why God allowed me to come to Canada”, she adds.

Meanwhile, a relative offered C24/7 to combat her cancer. The food supplement, a flagship product by Alliance in Motion Global, was launched in April 2010 and promoted to contain plant-based nutrients from vegetables, fruits and mushrooms that act as anti-oxidants.

The company partnered with U.S.-based Nature’s Way, a natural products manufacturer, to sell the product in the Philippines.

“There were lots of testimonies about how it cured some patients’ cancers,” said Eloisa. At first she hesitated to use the product, but upon hearing that some doctors in the Philippines recommend the supplement in hospitals, she started taking it while thinking of ways to fight her cancer.

When without supply, she would buy organic vegetables such as kale, cucumber or avocado, which she turned into juice to drink.

For the longtime hairdresser who started her career at the classy Salon de Manila, working overseas was not a dream.

Eloisa started from the bottom rungs at the salon. She had been working as a day care teacher’s assistant previously when she saw how hairdressing could bring more income as she was helping her first husband raise their first-born.

From being a salon assistant she rose to the ranks of top hairstylists at the salon and branched out to work in big studios to tend to celebrities and pop bands.

With 13 years of hairdressing experience, her scissor hands would eventually cross the globe and find their way to St. Albert, Alberta in Canada in 2009.

She arrived in February when winter was at its peak – she had to double her efforts to know the culture, adapt to the climate and at the same time, learn the ways of hairdressing in Canada.

She was no less, a “red seal” hairstylist, a top-caliber hairdresser who had met the national standard in this skilled trade in Canada, upon passing the examination in 2009.

In terms of differences, she says that Canadian clients tend to be more direct with what hairstyle they want, while Filipinos simply rely on the stylist to decide. And while wavy hair means going to special events in the Philippines, texturing and chemically waving hair for Canadians could be for going to work or malling. 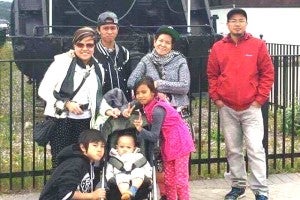 Eloisa with family in Jasper, Alberta in a 2014 photo. GOFUNDME

“For seniors, you could try an “Imeldific” look where you style their hair like a cotton-candy,” she says. “Sa atin, pag matanda suklay lang, pusod, okay na. Wala nang panahon ang mga matatanda sa atin magpa-parlor pa (Seniors [in the Philippines] don’t have time to go to a parlor, they just comb their hair or do a pony tail),” she explains.

Describing their work as “pulido” (thorough), the couple, both hairdressers at Escada Hair Salon in St. Albert, are well loved by clients because of this unique trait.

In her teens, Eloisa was a devout Christian, volunteering in mission works. She stood on street corners with a loudspeaker, spreading her belief and hopped on buses doing the same. Then she decided to leave it all and start living a “normal” life.

The minute she was diagnosed in 2014, Eloisa turned to her faith and started her daily conversations with God, she says. These conversations keep her hopes up for a miracle, she adds. Her room at Sturgeon Hospital also became her worship area. Listening to speeches from known evangelist Joel Osteen gave her courage, she says.

“I am praying to God to extend my life so I could grow old with my husband, and see my children grow up, attend to their graduation rites or weddings, even holding my grandchildren,” she adds.

Eloisa finished five rounds of radiation therapy to the back of her neck and left breast. She was discharged home on July 28 and is currently on Tamoxifen – a hormone therapy that prevents cancer cell growth.

Emerson is bewildered by his wife’s positive outlook. “I don’t know where she gets her strength from,” he says. Meanwhile, he carries on with work while Eloisa recuperates at home.

“We are thankful for our friends who help with finances, emotionally, even looking after our children,” he says in Filipino.

Eloisa’s battle with cancer is also gaining support among Filipinos in St. Albert.

On Sunday, August 13, the couple’s friends ran a garage sale as a fundraiser. A volleyball tournament in support of the family, between Jesus is Lord Global Movement-St. Albert and Edmonton chapters where the family is active, also concluded on Sunday.

An online crowd-funding page that has been active for Eloisa’s family since July has raised over $1,000.

“God will heal me,” replied Eloisa, when a doctor at Sturgeon Hospital said there was no cure for her cancer. She says despite the odds, it is her strong faith in God that will tip the scale.