Another Indonesian who fled from Abu Sayyaf found 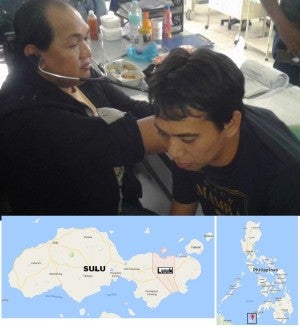 Indonesian Mohammad Sofyan is examined by Dr. Raden Ikbala before his return to his country. He escaped from his Abu Sayyaf captors in Luuk, Sulu on Wednesday morning.  CONTRIBUTED PHOTO

ZAMBOANGA CITY – Another Indonesian who escaped from the Abu Sayyaf was recovered in Luuk town in Sulu on Wednesday afternoon.

Major Filemon Tan Jr., spokesperson of the Western Mindanao Command, said a certain Ismail, chief officer of Tugboat Charles, was found around 4:30 p.m. in Barangay Bual, the same village where another kidnap victim, Mohammad Sofyan, was found at past 7 a. m.

Sofyan earlier claimed he and another Indonesian escaped while their captors were asleep.

Tan said Ismail was in the custody of government troops as of late Wednesday, and would be brought to Jolo town.  SFM