TORONTO, Ontario — To say that the University of the Philippines’ Korus capped its “Tour of the Americas” with a dazzling single performance in Toronto the evening of Saturday, August 13, would be an understatement.

The 17-member University of the Philippines Concert Chorus brought the audience to its collective feet through four foot-stamping encores at the end of its three-hour performance of classic choral offerings dubbed “kontemporarius,” native music or “katutubo” and modern musical arrangements with a twist of well executed choreography called “koreokapela.” 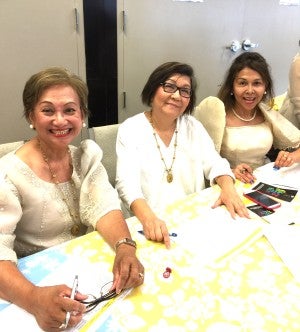 Korus began the evening with “Vytautas Miskinis’ Diffusa Est Gratia” (Grace Is Poured).  Glorious cascades of sacred choral music poured over the audience and set the stage for the “Gloria” from Ryan Cayabyab’s “Misa,” Ralph Manuel’s “Alleluia,” a mashup of “I Believe” and “Ave Maria” by Bread and Tucker, and Moses Hogan’s “My Soul’s Been Anchored in the Lord,” among others. 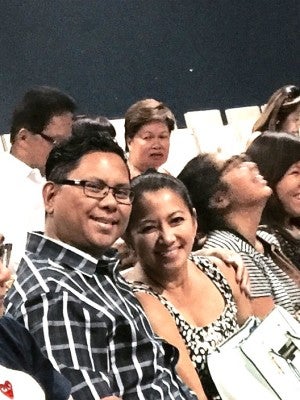 Ken Quismundo and his wife Beth prepare to enjoy the show. MARISA ROQUE

After the first intermission, Korus switched the mood from the divine to the mundane through familiar and well-loved folk tunes of the Philippines.  Toe tapping renditions of “Katakataka” by Suarez-Laureola, followed by a fisherman’s tale titled “Pasigin” by Eudy Palaruan, then the romantic “Sana’y Wala Nang Wakas” by Robert Delgado, the “Urian Medley” by Annie Nepomuceno, “Hataw Na” by Teresa Barrozo, “Urong Sulong” by Agot Espino, and “Kalesa”by Nhick Pacis held the audience spellbound.

The second intermission saw a rush for the food concessions manned by FV foods and gave the audience time to process their awe at the vocal prowess and professionalism of Korus members.  Kenneth Quismundo, a UP graduate and now a Toronto resident, gushed, “I saw and heard them 20 years ago, and I want to compare their performance then and now.  They are phenomenal.” 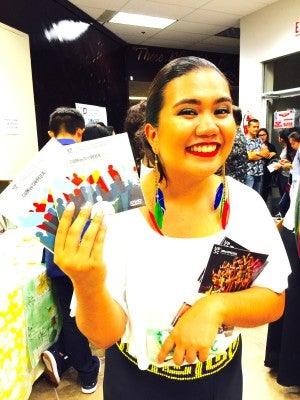 The “koreokapela” portion, the last section of the show, had Korus singing and dancing to several selections that included a Tribute to the King of Pop (Michael Jackson) and One Day More (Alain Boublil and Claude Michel Schonberg) from the Broadway hit Les Miserables.

The Toronto performance was the last segment of Korus’ tour, as it was set to fly home the following day Saturday, August 13, which also happened to be the birthday of Prof. .Jai, who was honored with a rendition of the “Happy Birthday” song, a bouquet and a celebratory cake onstage.

UPAAT members and volunteers billeted and supported the members of Korus during their Toronto stay.