A plea for humanity

When INQUIRER.net published my commentary on extrajudicial killings, 9 out of 10 responses were emotion-laden tirades, ad hominem attacks and knee-jerk reactions. Human nature being what it is, I understand the anger. I get it. Frightened by the specter of criminality linked to shabu, many, in particular President Duterte’s Internet army, view the government’s uncompromising war on drugs as the only way out of the national morass; they resent arguments against the violation of basic human rights, no matter how rational, because they see these as blunting presidential initiatives.

In their unwavering support of the president, people point out the following justifications: the drug menace has taken over the country; nothing has been done in the past; the justice system is broken; the international media have exaggerated the killings; etc.

These arguments would be valid if there was a debate on the existence and extent of the drug problem, on the need to address it, or on President Duterte’s noble intent to rid the country of crime. 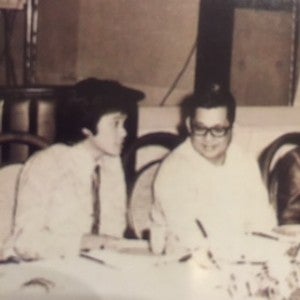 The author with Benigno Aquino in April 1972 when the latter was invited to speak at the Cebu Institute of Medicine. Aquino correctly predicted that Marcos would soon declare martial law. CONTRIBUTED

But the crucial question is whether extrajudicial killing – to put it bluntly, a shoot-to-kill, ask-questions-later policy – is justified. Whether one looks at this question from a standpoint of jurisprudence or religion/ethics, or simply from common sense, the answer is the same: No.

Article 3 of the Philippine Constitution provides for basic human rights. Everyone has the right to due process and equal protection under the law. Everyone is presumed innocent until proven otherwise. Everyone deserves to have a day in court. And everyone, whether rich or poor, educated or illiterate, deserves legal counsel. If this basic constitutional right is disregarded, any police officer (or death squad volunteer), anyone can justifiably shoot me, you, or anyone else whose name appears on the drug list — whether the accusation is true being beside the point.

I recently read an article by a Filipino lawyer who argued that drug addicts and criminals do not have basic human rights and therefore do not deserve due process or their day in court. He needs to review his notes and textbooks from law school. His premise is erroneously based on presumption of guilt without evidence. Who makes the decision whether an individual is a criminal or not?

In a just and legal society, that critical decision is made in a court of law, where both prosecution and defense are heard, where evidence is reviewed and where an objective and fair judgment is made by judge or jury. It is inherently wrong for the roles of judge, jury and executioner to reside in one person or entity. In extrajudicial killings, the police or vigilante who holds (and fires) the gun also makes the decision on the subject’s innocence or guilt.

We have learned through centuries of carnage and barbarism, particularly as evidenced in the Holocaust, that killings as solutions bring fleeting – if any – success. In the short term, peace and order and stability may be achieved. Ultimately, however, a culture of death, intimidation, repression and disrespect for human life takes root. In Goethe’s magnum opus, Faust sells his soul to the devil for ephemeral gain only to regret it in the end.

The bloodbath in the Philippines is nowhere near the magnitude of the killing fields in Cambodia or the Cultural Revolution in China. But it is treading that dangerous path. George Santayana’s words are worth reflecting upon: “Those who cannot remember the past are condemned to repeat it.” Even President Duterte himself acknowledges that the future of the nation cannot be built on dead bodies. 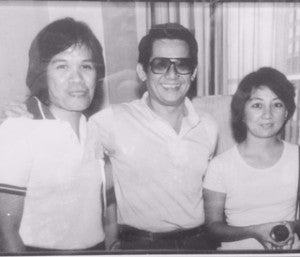 Aquino met the author again later in Detroit for a Movement for a Free Philippines gathering. Aquino looked trim, after years of solitary confinement and recent open-heart surgery. It was during this meeting that he said, “The Filipino is worth dying for.” CONTRIBUTED

The drug problem is complicated, and its solution complex, as we all know. But, instead of simply going after poor slum dwellers, why not go to the root source of the problem? Wouldn’t it make more sense to cut the source of drugs: China, primarily? To beef up security at entry points? To prosecute drug lords, narcopoliticians, corrupt police and military, compromised judges? To rectify the justice system? When the head of the octopus is severed, the tentacles will wither.

Let us offer proper treatment instead of bullets to drug addicts. They need a helping hand, not a death sentence. San Miguel’s generous donation for drug rehabilitation is a cue for other business corporations to follow. The offer by some Catholic bishops to open their churches to drug addicts is a positive move. Indeed, there are various ways of responding to Pope Francis’ plea for a year of mercy.

Let us stop the senseless killings. We are a better country. We are a more humane and compassionate people.

Dr. Ed Gamboa was a student activist and a member of the Movement for a Free Philippines during the dark days of the Marcos dictatorship. He is a fellow of the American College of Surgeons, the International College of Surgeons, and SAGES. He participates in surgical missions throughout the Philippines and together with his wife Lucie helped build the Santo Nino Charity Clinic with the Missionaries of the Poor in the largest slum area in Cebu. He is a knight of the Sovereign Military Order of Malta and holds an MA in Theology from the University of Notre Dame.