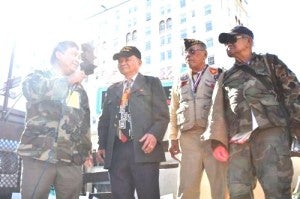 LOS ANGELES – An organization of Filipino WWII veterans here added its voice to the opposition to the burial of former Philippine President Marcos in the country’s national heroes’ cemetery.

In a press statement, the group Justice for Filipino American Veterans (JFAV) said that Marcos was a fake hero and that “he does not deserve to be honored as a hero and buried in the heroes’ cemetery.” The US Veterans Administration had concluded that Marcos had manufactured his own military medals.

The JFAV, headed by Arturo Garcia, issued the statement as various social groups in the Philippines have created a Citizen’s Assembly on Sunday, August 14, to protest the burial of Marcos at the Libingan ng mga Bayani on September 18.

Garcia criticized newly elected Pres. Rodrigo Duterte for having allowed his burial at the heroes’ cemetery. “Duterte insults the 250,000 Filipino American veterans who fought for democracy during World War II and the 73,000 victims of human rights violations during martial law, which includes his own mother,” he said.

Duterte, a close friend of the Marcoses, appears bent on making true his promises to the late president’s family as a way for the country to heal. He called those who opposed his plan “yellow oppositionists” who are identified with his predecessor, Pres. Benigno Aquino Jr.

“Duterte is a Marcos loyalist. He is not healing the nation, he is dividing the nation by siding with the dictator. We will never accept that Marcos was a hero,” Garcia said.

“Let him be buried in his birthplace, where he wished to be buried. The Marcoses are such power players and ego-trippers,” said a teacher in a rally at the Citizen’s Assembly in Manila.

Marcos’ body is currently preserved in a refrigerated glass crypt inside his family mausoleum in Batac.