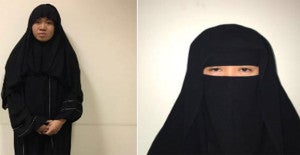 KUWAIT CITY– Kuwait said Friday, August 5, that it arrested a Filipino woman it accused of joining the Daesh (ISIS) group through its affiliate in Libya and who planned to launch an attack.  The Interior Ministry said the woman, born in 1984, entered Kuwait last June as a “house maid.”

“She confessed she was ready to carry out any terrorist attack once circumstances and means were ripe in order to undermine security and stability in Kuwait, as well as ignite sedition,” the state-run Kuwait News Agency reported.

KUNA also published a photograph of the woman in a black abaya.  The statement did not identify the woman, nor did it say if she faced criminal charges. It wasn’t immediately clear if she had legal counsel.

Tiny, oil-rich Kuwait has been hit by a Daesh attack before. A suicide bomber killed at least 27 people and wounded 227 during the holy month of Ramadan last year.

Last month, Kuwait foiled three planned Daesh attacks on the country, including a plot to blow up a Shiite mosque, after launching raids that resulted in the arrest of militants.

Kuwait is part of a 34-nation alliance announced by Riyadh in December aimed at countering Daesh and Al-Qaeda in Iraq, Syria, Libya, Egypt and Afghanistan.