Filipinos heavily represented in LA swearing in of new citizens 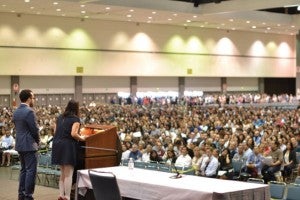 Filipino was the second most represented nationality in the recent swearing in of 6,000 new US citizens in Los Angeles. AJPRESS

LOS ANGELES – Many of the immigrants reciting the pledge of allegiance for the first time as American citizens on Thursday, August 11, arrived hours before security began allowing people into the West Hall of the LA Convention Center.

The estimated 6,000 immigrants who swore their loyalty to the United States on Thursday came from 142 different countries. Filipinos were the second most represented nationality among participants of Thursday’s ceremonies.

Most had fought through administrative and financial hurdles and waited years for the government to sort through the millions of naturalization applications it receives annually to reach their petitions.

For them, the idea of missing the oath-taking ceremony was unthinkable, according to Claire Nicholson, public affairs officer for the US Citizenship and Immigration Services (USCIS).

“I was so excited I didn’t go to sleep until 3 [a.m.], then i woke up again at 5,” said Jacqueline McGinley, a caregiver who immigrated from the Philippines 10 years ago. “Since I was 15 years old, it has been my dream to come here.”

After separating from her first husband in the Philippines, she decided to seek greater opportunities in America. Over time, she found work, remarried and started a family. However, she admits transitioning into life in America wasn’t easy.

Project manager Ronald Laserna said new immigrants need to be ready to take whatever opportunities come to them. Laserna was an engineer in the Philippines, but had to settle for work beneath his qualifications as a plant operator when he and his children reunited with his wife, a naturalized citizen, three years ago.

However, he said that his hardships were worth the benefits and opportunities life in America affords his family. He encourages those who are enduring complications with the application process and long waits to persevere.

Despite being recruited from the Philippines by the Compton Unified School District to teach in California, Jesusa Rodriguez had to wait eight years before getting her green card in 2010. Upon gaining her citizenship on Thursday, the curriculum specialist said she was happy, but admitted feeling hesitant to renounce her Philippine citizenship.

“Don’t forget where you came from,” said USCIS Field Office Director Nancy Alby. Bring that with you because [diversity] is what makes this country great.”

Many new citiezens received resources and assistance from outreach programs they learned about through the USCIS website.

Alby recommended the site as a starting point for what might become a “long journey.”

“I’ve been waiting for 11 years,” said U.S. Army Private Ha-Yun Kim, who was brought here by her parents from South Korea. “My family struggled a lot through the process.”

She became the first in her family to be naturalized on Thursday. After spending most of her life in the U.S., the aspiring pharmacist decided to enlist in the military while studying biology at the University of Southern California.

He said he was excited to explore the possibilities that will become available for him in America after he completes his tour of duty and graduates from college.

“It’s so encouraging to see these people so enthusiastic to have opportunity,” said Republican volunteer Bill Thomas while doing outreach for his party at a booth outside the convention center. “In my experience, new citizens are more energetic in wanting to contribute to society and wanting to make a success of themselves than some of the people who were born here.”

Thomas declined to comment on statements and proposals regarding immigration made by Republican presidential nominee Donald Trump.

However, speaking on his own behalf, Thomas said making immigration policies fair for all applicants and safer for Americans does not necessarily mean a reduction in immigration rates.

Thomas and his party’s message of hard work and American exceptionalism has resonated with Kareem Mutia.

“I’ve always liked the Republican Party,” said the newly naturalized citizen, who plans to vote for “whoever has the greatest strength of leading and ruling the country.”

Thomas said most of the Filipinos he knows are Republicans like Mutia.

However, most of the people Filipinos interviewed by the Asian Journal on Thursday revealed Democratic leanings.

Grace Barrios, the vice president for outreach of the group Pilipino American Los Angeles Democrats (PALAD), said that the GOP is out of touch with non-whites and women.

“The voice of the Republican party now is not inclusive. They don’t understand the minority voice,” said Barrios, who went on to highlight Democratic presidential nominee Hillary Clinton’s history of support for Asian Americans.

Whatever their political inclinations, exercising the right to vote is just one of many ways the USCIS hopes naturalized citizens take part in American society.

“People like to get involved in different ways,” said Alby. “The most important message is be a part of your community.”