LAS VEGAS, Nevada — I guess it’s history when 3,000 Asian Americans show up in a 4,500 capacity room to listen to all four presidential candidates. But at times the momentous occasion seemed lost on the crowd who had to constantly be prompted to laugh, yell, or make noise like they believed in the whole enterprise.

Well, it was a forum, not a rally.

But there’s another problem when one of the participants is Filipino and not really a presidential candidate.

Sean Reyes is Utah’s attorney general, a Republican, and a Filipino American.

You can tell by all the rice and spam jokes he told at Friday’s Asian American Pacific Islander Presidential Forum in Las Vegas. Oh, and he rapped a little bit too. 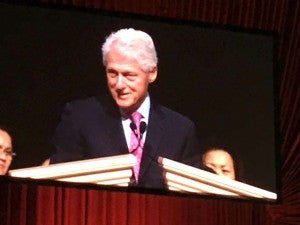 Seen as one of the future stars of the Republican Party, Reyes drew the short straw this time. When you’re sent in as a Trump surrogate to wow a basically Democratic crowd, you better know how to sing and dance.

In politics, it’s called pandering, however. And Reyes did his best to ingratiate himself before the crowd got smart and politely got up and left.

Considering Trump’s comments about Filipino Americans recently, Trump would have been best served had he shown up himself to the Colosseum at Caesar’s Palace. It was after all APIAVote’s Presidential Town Hall Forum, said to be the largest such gathering to date for Asian American voters.

But Trump doesn’t care about the community. So in came Reyes as brand manager. Reyes didn’t quite apologize, but clarified Trump’s statement.

Of course, he does. As should everyone. And, of course, no one wants terrorists in their country. The problem is Trump’s statement isn’t about simply acknowledging that there are Muslim areas in the Philippines that may be prone to terror. It’s Trump’s implication that ALL Filipinos are terrorists.

That’s quite a leap. But there was Reyes dutifully defending The Donald.

Except that is for the other hot Trump topics. There was nothing on the recent Trump calls to violence toward Hillary. Nothing on the Trump statements calling President Obama “the founder of ISIS.” Nothing on Trump saying those statements were “sarcastic.”

Instead, Reyes told his annoying spam and rice jokes. Read from some policy sheets. He even rapped to show his street cred. By the end, the audience found Reyes likeable enough. But Trump? Anything about the release of his taxes? His bankruptcies? The disparaging remarks about the Latino judge?

The other key surrogate, President Bill Clinton, did much better.

Clinton was helped by some of his favorite Filipino connective devices. He was introduced by Filipino American Gloria Caoile, the labor leader who worked closely with Clinton during his presidency.

It didn’t even matter that he called her “Grace.” There was even a mention by Clinton of his Filipino doctor.

Clinton did seem campaign weary, but still managed to deliver a talk that was at times more philosophical than a standard stump speech. He urged Asian Americans to show up to vote “big time everywhere” in order to counter the politics of fear that is dividing our country. 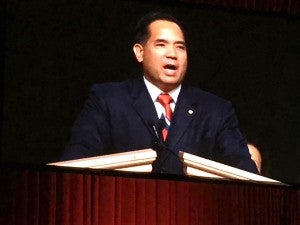 Clinton said this election is “about what kind of country we’re going to be.” He said the central metaphor was “walls or bridges,” and that Hillary’s election would mean a better world with prosperity broadly shared, and declining inequality.

Clinton almost got out of the hall without having one question asked about Hillary’s email problem. When a question was posed, Clinton fought off the exit music to answer and defend his wife.

He said there was a different, stricter standard applied to her as opposed to other career diplomats, and that the state department and security agencies had different classification systems.

“These things were never resolved,” said Clinton. “It’s too complicated to explain to people, but basically do you really believe there are 300 career diplomats because that’s how many people (were on) these emails. All of them are careless with the national security? Do you believe that? Forget about Hillary. Forget about her, is that conceivable? If it were that important shouldn’t we have all heard about that earlier? Or shouldn’t there have there been some instant resolution of this? And if it were something to worry about would President Bush 41’s national security advisor Adm. Scowcroft endorse Hillary?”

It’s amazing how the email questions linger. But they do go straight to the trust issue, which continues to be the critical litmus test for any would-be Hillary voters.

Having Surrogate Bill defend her was almost as good as having her there. Not so for Trump surrogate Reyes.