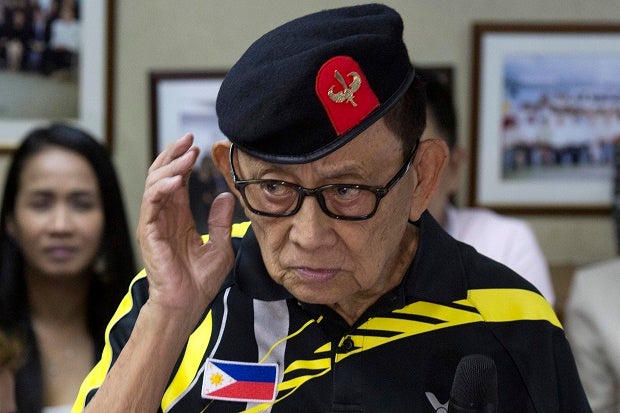 In this Aug. 9, 2016 file photo, former Philippine President Fidel Ramos listens to a question during a press briefing at the Philippines consular office in Hong Kong. AP FILE PHOTO

Former President Fidel V. Ramos on Friday said China had welcomed him to visit Beijing for discussions in the wake of last month’s ruling of an international arbitration tribunal in favor of the Philippines over China’s excessive claims in the South China Sea.

President Rodrigo Duterte has appointed Ramos his special envoy to China to initiate talks with Beijing after the UN-backed Permanent Court of Arbitration in The Hague ruled last month that China’s claim to almost all of the South China Sea had no basis in international law.

The tribunal also found that China violated the Philippines’ rights to fish and explore resources in waters within its 370-kilometer exclusive economic zone in the strategic waterway.

Ramos, speaking in Hong Kong near the end of a two-day trip undertaken to rekindle Philippine ties with China, said he had met with two Chinese officials and they had discussed the need to build trust and confidence to reduce tensions in the South China Sea through talks.

A longtime advocate of closer Philippine-Chinese ties, Ramos said he had discussions with Fu Ying, chair of the foreign affairs committee of the National People’s Congress, China’s communist-controlled legislature. Fu Ying is a former ambassador to the Philippines.

The two Chinese officials met with Ramos in Hong Kong in their private capacity, according to a statement released by Malacañang.

A statement signed by Ramos, Fu Ying and Wu described the meeting as between “old friends” and had taken place “in a friendly atmosphere.”

Ramos “expressed the Philippine government’s desire to hold formal discussions with the Chinese government on issues of mutual concern and interest at the appropriate time to explore pathways to peace and cooperation,” the statement said.

“They explored possible human and ecological security options and suggestions for the benefit of their people,” Malacañang said in its own statement.

The discussions covered avoiding tensions and promoting fishing cooperation, encouraging marine preservation, cooperation in the fight against drugs, crime and corruption, and encouraging think tank exchanges on issues of mutual concern and interest, the Palace said.

Ramos told reporters in Hong Kong that he, Fu Ying and Wu did not discuss territorial disputes in the South China Sea, but talked about fishing rights there.

Their joint statement said they “discussed, in their private capacity, the way forward in the spirit of universal brotherhood and sisterhood for peace and cooperation between the two countries.”

It added that all parties “looked forward” to the start of formal talks, which it said would be held in Beijing and Manila.

Ramos said there would be a second round of discussions soon.

“As to where this will take place, we don’t know yet. We have to go back to Manila to find out the latest developments on the official side,” he said and suggested another negotiator might take his place.

There would be ample opportunities for talks between the two governments at a series of upcoming international gatherings, he added.

Philippine-Chinese relations have frayed in recent years due to tensions over Beijing’s claims to almost all of the 3.5-million-square-kilometer South China Sea.

The Philippines brought the action against China in 2013 after Beijing seized Panatag Shoal (Scarborough Shoal), a traditional fishing ground for Filipino fishermen off Zambales province, after a two-month maritime standoff in 2012.

Insisting it had “undisputed sovereignty” over the South China Sea, China refused to take part in the proceedings and rejected the tribunal’s ruling, calling it “waste paper.”

Besides the Philippines, Brunei, Malaysia and Vietnam also have overlapping claims in the South China Sea. They stand to benefit from the tribunal’s ruling should they decide to bring their disputes with China to the court.

The South China Sea is crisscrossed by sea-lanes through which $5 trillion in shipborne global trade passes every year.

It is dotted by islets, reefs and atolls that are believed to be sitting atop vast oil and gas reserves.

To bolster its claims, China has built artificial islands on seven of the reefs in the Spratly archipelago, topping some of them with runways, radar towers, hangars and bunkers that can be used for military operations.

On Wednesday, it launched a satellite to protect its interests in the South China Sea.

Responding to China’s militarization of the area, Vietnam has deployed new mobile rockets to several of its islands in the area.

The United States, a defense treaty ally of the Philippines, has challenged China’s excessive claims with freedom of navigation operations near the artificial islands Beijing has built in the disputed waters.

Washington, however, has called on the claimants to avoid actions that build tensions and take steps toward a peaceful resolution of the disputes. With reports from AP