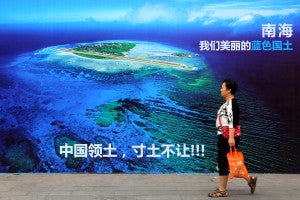 FILE – In this July 14, 2016 file photo, a woman walks past a billboard featuring an image of an island in South China Sea on display with Chinese words that read: “South China Sea, our beautiful motherland, we won’t let go an inch” in Weifang in east China’s Shandong province. An international arbitration panel’s decision on the contested waters of the South China Sea so far is fueling regional tensions rather than tamping them down. In the ensuing 11 days, China has responded to the sweeping victory for the Philippines by flexing its military might. The Philippines faces pressure both at home and abroad not to cede an inch to China after the July 12 decision by a tribunal at The Hague-based Permanent Court of Arbitration. (Chinatopix via AP, File)

MANILA — Diplomats and international legal experts raised concern that the deep divide in Asean has not been helping tame China’s massive military buildup and activities despite an arbitration ruling that upheld Philippine sovereign rights on strategic waters in the South China Sea.
Prof. Michael Heazle of Griffith University in Australia said “the risk of conflict is increasing in the South China Sea due to lack of unified position of Asean.”

“The lack of unified position of Asean is allowing major powers to come into play,” said Heazle said in his presentation at the Second Manila Conference of the South China Sea held at Manila Hotel on Wednesday.

Sumathy Permal, senior researcher of Center for Maritime Security and Diplomacy, Maritime Institute of Malaysia said failure of Asean to come up with a unified position will create three scenarios where China will be able to increase military presence in the disputed waters.

One, the sea disputes will be causing more conflict of the Air Defense Identification Zone (ADIZ) between China and major powers; two, China will be able to push through with building marine nuclear plants; and three, China will continue to hold military exercises over the disputed waters.

Asean Foreign Ministers have been held in a deadlock, not coming up with a joint communiqué since 2012 due to the divided stand on South China Sea disputes, as four members — Philippines, Vietnam, Malaysia and Brunei are claimants to the disputed waters.

During recent Asean meeting in Vientiene, Laos, Philippine Foreign Affairs Secretary Perfecto Yasay Jr. said he vigorously pushed but failed to convince Asean to include the  arbitration ruling in the joint communiqué.

Heazle said the best approach for the region would be to share similar views on South China Sea disputes to avoid the escalation of tensions in the South China Sea.

“If that kind of unified opposition and support is not forthcoming, it creates the more dangerous situation because that means that external powers to the dispute such as the United States and potentially its allies will become more directly involved,” said Heazle in an interview at the sidelines of the forum.

He added that unity in Asean as a political front would be needed “to keep the situation from escalating into greater tension between the great powers.”  SFM