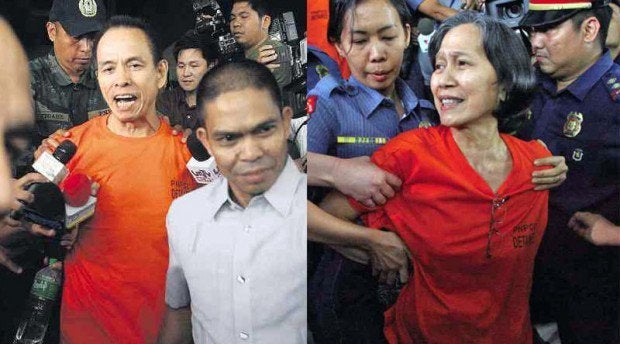 It’s all systems go for three National Democratic Front of the Philippines (NDFP) consultants facing criminal charges to participate in peace talks in Norway later this month, while three others may well be on their way as well.

Manila Regional Trial Court Branch 32 Judge Thelma Bunyi-Medina granted on Friday the urgent motions for the issuance of a court order allowing Satur Ocampo and Randall Echanis to travel to the Netherlands and Norway “on Aug. 16 to Sept. 4.” The two are facing multiple murder charges in connection with the discovery of a mass grave in Leyte province in 2006.

She also granted coaccused Rafael Baylosis’ petition to participate in the peace talks in Oslo, Norway, on Aug. 20 to 27.

Medina made the decision after she reinstated bail at P150,000 for Baylosis, who surfaced earlier in the day at her court and was finally arraigned on multiple murder charges.

Baylosis had forfeited a P100,000 bail earlier set by the Supreme Court after he skipped his arraignment in July 2015 allegedly due to “intense surveillance and reports of threats to him and his family,” according to Edre Olalia of the National Union of Peoples’ Lawyers that represents him.

“I subjected myself to the jurisdiction of the Philippine government court to give the peace process a chance to continue and to help in the peace negotiations. That is the reason,” said Baylosis, who did not enter a plea, and subsequently posted bail.

Although Medina also granted the urgent motion for release on bail filed by coaccused Wilma and Benito Tiamzon, and Adelberto Silva, their lawyer Rachel Pastores said they still had urgent motions pending in other courts.

“But we are hoping they will be acted upon soon,” Pastores said.

Medina set bail for the Tiamzons and Silva at P100,000, and allowed them to join the talks in Norway.

The talks are aimed at ending one of Asia’s longest-running insurgencies that began in 1969, left hundreds dead and stunted economic prospects in the countryside. The NDFP is the political arm of the underground Communist Party of the Philippines (CPP) and its armed unit, the New People’s Army (NPA).

The talks have often bogged down in the past with the rebels’ demand to free jailed colleagues, but President Duterte—a former student of CPP founder Jose Maria Sison—initiated the resumption of the negotiations shortly after he won the elections in May.

But the President angrily lifted a unilateral ceasefire just days after it came into effect, after a progovernment militiaman was killed in an NPA attack in the south.

Medina noted in her four-page order that the prosecution had no objection to temporarily free the accused, and stressed that her order was “pursuant to the government’s intent to enter into a peace agreement with the organization they represent.”

She said all six were permitted to travel subject to the conditions imposed by the Department of Justice in an Aug. 9 memorandum that said the release would be only “for the purpose of their attendance and participation in the formal peace negotiations … and until the duration of the peace negotiations.”

The court also ordered the communist peace consultants to provide their complete contact information both in the Philippines and abroad. They were also ordered to return home after the talks and to report to the Philippine Embassy “whenever required.”

“Also, they are ordered to submit to this court within 10 days from their arrival a written report as regards the outcome of said negotiations and discussions,” Medina said.

Medina, however, said she denied the consultants’ request to remove their names from the government watch list, hold-departure order, lookout bulletin order or any similar document “as their travel abroad shall be granted (on a) per request basis.”

She also denied the Tiamzons’ and Silva’s petitions for bail to be applied to other courts where they had pending cases because the court “obviously lacks jurisdiction” over these. TVJ

All systems go for 3 NDF consultants in Oslo talks