Rule of law, not coercion must be upheld for maritime order—Japan FM

DAVAO CITY, Philippines—Japan Foreign Minister Fumio Kishida on Thursday said maritime order in the areas where China has territorial disputes with several countries, including the Philippines and Japan, could only be achieved through rule of law and not coercion.

“Maritime order based on the rule of law would be responsible for maritime security and prosperity. It is important that we submit ourselves to the rule of law and not the rule of coercion in the pursuit of solution to the conflict,” Kishida told reporters here.

China was being accused of bullying its small Asian neighbors such as the Philippines over patches of land and rock formations in the West Philippine Sea such as the Paracel islands and the Spratlys; and Japan over areas of East China Sea—particularly the Senkaku islands.

Kishida, the first foreign government official with a Cabinet portfolio to visit here since President Rodrigo Duterte won the elections, said in his view, rule of law—insofar as the disputes with China were concerned—can only be achieved if all parties agreed to cooperate with each other.

“I believe that the achievement of rule of law at sea is through closer partnership and that is important.

Japan is cooperating closely with all countries concerned for the peaceful resolution, not coercion,” he said.

Kishida said Japan was also backing the Philippines in the dispute with China but underscored that Tokyo wants the issue settled peacefully.

China has criticized Japan for its “meddling” in the issue of the West Philippine Sea. 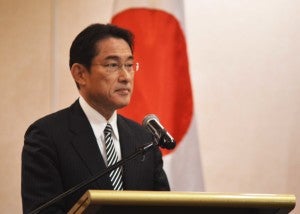 He said Japan will also continue to provide the Philippines with support, such as sea vessels, to improve its maritime security and to “improve our mutual interests such as the South China Sea” but there will be no military assistance.

“I hope our meeting would further strengthen our strategic partnership and cooperation. I am confident that our nations, sharing strategic interests, will go forward to actively contribute to the peace and stability of the international community,” he said.

“We are one in articulating such great concern (over China’s activity in the West Philippine Sea). We urge China to make sure that the maritime rule of law be respected,” Yasay said.

He said that like Japan, the Philippines has also experienced China’s use of force and intimidation and provocation in its assertion of claim over the territories.

Yasay also said that “everyone must indeed respect our maritime order of security in these areas and urge (China) to be firm in their respect for the rule of law.” RAM

Japan FM protests to China over ships around disputed island