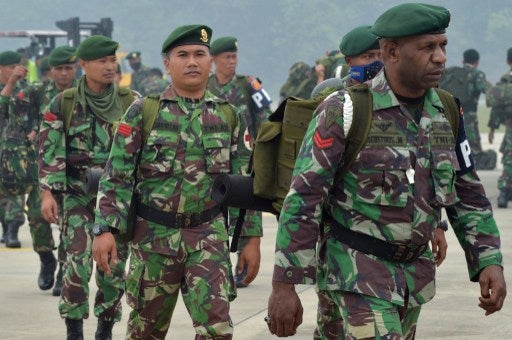 JAKARTA, Indonesia—The Indonesian army has said it is ready to deploy its personnel to secure the release of 10 abducted Indonesian sailors should a deal on joint land-based operations with the Philippines and Malaysia be reached in the future.

Since the first hostage-taking incidents in March, the army has prepared its troops including its Special Forces (Kopassus) and Strategic Reserve Command (Kostrad), said Army Chief of Staff Gen. Mulyono on Wednesday (August 10).

“All Kopassus and Kostrad personnel, as well as Alutisista have been readied to be deployed at any time we are ordered to conduct military operations,” Mulyono said.

During a trilateral meeting between the defense ministers of Indonesia, Malaysia and the Philippines in Bali last week, Indonesia proposed coordinated land-based operations to pursue militants who have taken Indonesian and Malaysian hostages onto Philippine land territory.

Mulyono, however, said the Philippine Constitution could not allow foreign troops to enter its territory and thus he had forbidden the army from participating in the operation to rescue the 10 Indonesian sailors held hostage by militants in the southern Philippines.

However, Mulyono assured the public that the militaries of Indonesia, Malaysia and the Philippines had drafted a joint strategy on how to anticipate and prevent another hostage-taking incident from occurring in the regional waters.

In early July, three Indonesian sailors were abducted in Malaysia’s Sabah waters, less than a month after the kidnapping of seven Indonesian crew members by Abu Sayyaf militants in the waters off the southern Philippines.