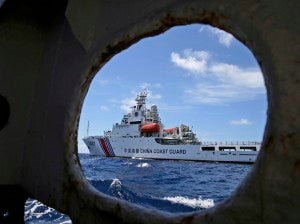 In this March 29, 2014, file photo, a Chinese Coast Guard ship attempts to block a Philippine government vessel as the latter tries to enter Second Thomas Shoal in the South China Sea to relieve Philippine troops and resupply provisions. In one of the world’s most disputed waters, the puny Philippine navy doesn’t stand a chance against China’s flotilla of combat ships. So when diplomacy went nowhere and Beijing’s ships seized a disputed shoal and surrounded another reef, Filipino officials took a desperate step: They went to court. AP

MANILA — Former foreign affairs secretary Albert Del Rosario urged the Duterte administration to engage naval powers in implementing the arbitration ruling that has made China accountable for massive marine damage in the disputed waters of the South China Sea.

He said the Philippines has been backed by multilateral powers in pursuing the arbitration case before the Permanent Court of Arbitration (PCA) in The Hague, “ and as a way of gratitude, we should engage them in settling disputes” in the South China Sea.

He agreed with the decision of President Duterte to appoint former President Fidel V. Ramos to negotiate with China.

“It’s work in confidence building. It’s accomplishing that (purpose) as it is a manifestation of good faith on our part,” said Del Rosario on Duterte’s bilateral track with China in an interview at the sidelines of the Post arbitration forum held Thursday at the De La Salle University in Manila.

Del Rosario agreed with Foreign Affairs Secretary Perfecto Yasay Jr. that the Philippines should be magnanimous in its victory “(but) we must be firm, we won this award, the rule of law must be followed.” 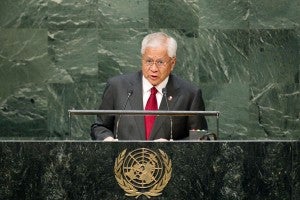 He said despite the landmark arbitration award, China has remained defiant and has kept on building military facilities on the disputed islands.

“We should be appealing to them for continued support so we can accomplish the objective that needs to be undertaken here,” said Del Rosario.

Supreme Court Associate Justice Antonio Carpio, meanwhile, said the Philippines should move to file a new case against China due to the extensive maritime damage it inflicted in the disputed waters. 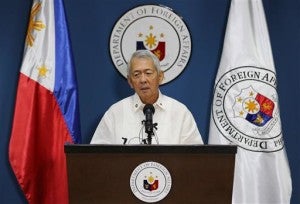 He said the Philippines and other claimant countries, such as Malaysia, Brunei and Vietnam, should establish a maritime peace zone in the disputed waters to stop China’s massive destruction of marine life.

In his presentation, Del Rosario said the arbitration court validated the Philippines’ claim that “China has not upheld its obligation to preserve the marine environment.”

In citing part of the arbitration court ruling on July 12, he stated:  “The Tribunal also found that Chinese authorities were aware that Chinese fishermen have harvested endangered sea turtles, coral and giant clams on a substantial scale in the South China Sea (using methods that inflict severe damage on the coral reef environment) and had not fulfilled their obligations to stop such activities.”  SFM/rga 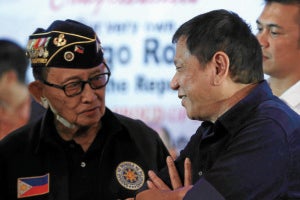