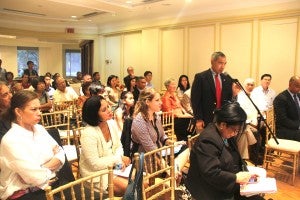 WASHINGTON, DC – Officials of the US Citizenship and Immigration Services are trying to smooth out the process for the reunification of Filipino veterans of World War II in the US and their relatives from the Philippines, USCIS representatives told Filipino American community members and veterans’ rights advocates.

“We are always looking for ways to streamline this program and to make it more user-friendly and make the processes quickest as we can,” Allison Kent of the USCIS stated at a Talakayan on July 28 at the Romulo Hall of the Philippine Embassy on the Filipino World War II Veterans Parole Program.

In July 2015, the White House released the report “Modernizing and Streamlining Our Legal Immigration System for the 21st Century” that announced the parole policy to enable eligible individuals to provide support and care to their aging veteran family members who are US citizens or lawful permanent residents. 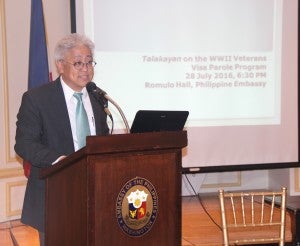 Since last June 8, USCIS has started to allow certain Filipino World War II veteran family members who are beneficiaries of approved family-based immigrant visa petitions a chance to receive a discretionary grant of parole on a case-by-case basis, so that they may come to the United States as they wait for their immigrant visa to become available.

Additionally, Philippine Consul General Emilio Fernandez pointed out that “The parole program’s implementation this year coincides with our two countries’ 70th anniversary of diplomatic relations. This certainly is an added milestone to our long established ties.”

Etcubañez and Fernandez were joined on the panel by USCIS officials Stephanie Kwan and Kent, as well as immigration lawyer Januario Azarcon. The speakers addressed issues related to the implementation of the program.

“We have work to do, work to ensure that our Filipino veterans get the recognition they deserve for the sacrifices that they made. We are in it with you. We will remember you and we will not forget you. We are going to work and get this done, and that is a commitment that our President has made and will continue to do so,” Chaudhary stressed.

Sonny Busa, regional director of the Filipino Veterans Recognition and Education Project (FilVetREP), closed the program by issuing a call to action to Metro DC residents to push their district representatives to sign on to the bill that seeks to award a US Congressional Gold Medal, collectively, to the 260,000 Filipino veterans in recognition of their dedicated service during World War II. 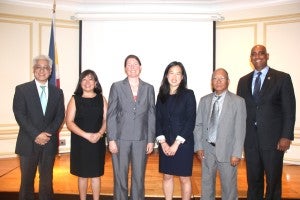 The Filipino Veterans of World War II Congressional Gold Medal Act of 2015 was already passed by the US Senate and awaiting to receive the required number of signatures at the House of Representatives. The proposed legislation will also recognize US commanders and servicemen who served in the Philippines during the war.

The Talakayan sa Embahada is a regular outreach program of the Philippine Embassy to engage the FilipinoAmerican community. This Talakayan was organized with the support of FilVetRep.