WASHINGTON, D.C. – A cultural school that keeps Filipino heritage alive among young Filipino Americans, a more than a century-old group that has represented the Filipino community in Philadelphia, a community action organization in Virginia Beach and a group that provides humanitarian aid to the poor in the Philippines won this year’s Alex Esclamado Memorial Award for Community Service.

Following a thorough screening process, the National Federation of Filipino American Associations (NaFFAA) and its official media partner, Filipino broadcast giant GMA Network, named the following organizations as the recipients of the award: 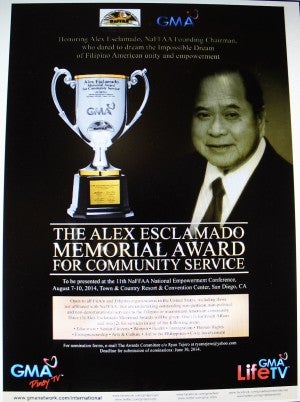 The winners will be presented at the 12th NaFFAA National Empowerment Conference to be held at the Valley Forge Casino Resort on 1160 1st Avenue, King of Prussia, PA 19406. The event will run from August 4 to 6.

Inspired by the life and works of notable news publisher and editor Alex Esclamado, this honor recognizes outstanding contributions of FilipinoAmerican organizations to the community.

“Alex Esclamado, founder and first national chairman of NaFFAA, was an impossible dreamer, who dreamed of something that we, overseas Filipinos, especially those of us in the United States, have always wanted for a long, long time,” says former NaFFAA Chairperson and head of the Awards Commitee, Greg Macabenta on the motivation behind the Alex Esclamado Memorial Award for Community Service.

“Alex dreamed of Fil-Am empowerment and unification, and it was only Alex who dared to dream of achieving those goals, and he actually did it. We want to continue to honor him through these awards.” 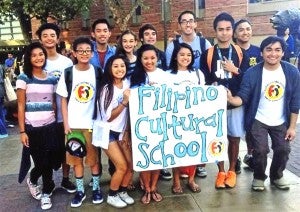 Students of the Filipino Cultural School in LA Country. CONTRIBUTED

“Now entering its 50th year, the FCS is looking to continue to refine its cultural-educational curriculum. On the most basic level, this means continually striving to improve the development and deployment of its core curriculum” courses in Popular Culture, Lifestyle, History, Dance and Language for children of all ages, K-12.

“These classes are held in the summer over the course of seven weeks. Families are actively solicited to take part in their child’s education, at all levels. Parents and grandparents chaperone, uncles and aunts assist with daily tasks, and older students are even paired up with younger ones so that the two groups can help each other…

“FCS is also continually striving to improve the process by which its volunteers, who are at the heart of its daily operations, are trained. These volunteers are all college-educated (from many top-tier local universities like UCLA and USC) who come from a variety of fields and industries. They are not paid but seek to work with FCS because they believe in its mission of giving back to the community.”

FAAPI was unanimously chosen by the Alex Awards Panel of Jurors for its historic and sustained civic involvement in the Philadelphia mainstream, representing the Fil-Am community and the Philippines.

FAAPI was founded in 1912 as the Filipino Association of Philadelphia (FAP) by some 200 discharged US Navy personnel who settled in the city. The association marked its centennial in 2012 with a year-long celebration dubbed, “100 years of Filipinos in Greater Philadelphia,” tracing its active representation of the Philippines and of Filipino culture and history, including the annual commemoration of Rizal Day.

The association represented the Republic of the Philippines in the grand military parade in Philadelphia on the occasion of the granting of Philippine independence by the US on July 4, 1946.   It was also an association member, historian Carlos Quirino, who found the ground breaking article on the “Manila Men of St. Malo” written by Lafcadio Hearn in the Harper’s Weekly 1873. This was in 1931 in the Philadelphia public library. In 2013, FAAPI unveiled a mural depicting the Philippines and Filipinos in Philadelphia. Entitled “Alab ng Puso” (Hearts Ablaze), with an imposing portrayal of Dr. Jose Rizal, it was the first Filipino mural on the US East Coast. 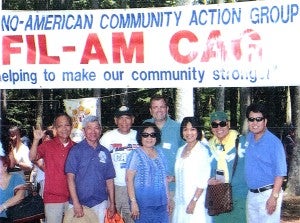 Based in Virginia Beach, Virginia, FilAmCAG was unanimously chosen by the Alex Awards Panel of Jurors for its active, tireless and valuable involvement in the American civic, economic and political mainstream, representing the interests of the Filipino community.

For over 25 years, FilAmCAG’s activism, especially in terms of voter registration and participation in the mainstream political process, has resulted in the recognition of the Fil-Am community as a potent political bloc in the State of Virginia and in Washington, DC, the appointment of FilAms to key positions in government, prompt action on cases of racial discrimination, and the resolution of conflicts in the community (including juvenile violence).  FilAmCAG played a major role in the long struggle to gain equitable rights for Filipino World War II veterans, culminating in legislation providing benefits. 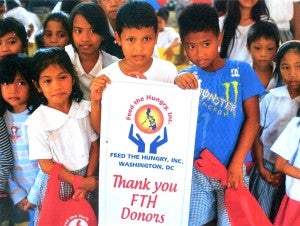 Beneficiaries of Feed the Hungry of Washington, DC. CONTRIBUTED

Based in Washington, DC, FtH was unanimously chosen by the Awards Panel of Jurors for its selfless, meaningful and multi-faceted efforts to provide humanitarian aid to the Philippines.

Starting as a simple act of feeding a small hungry street urchin during a Christmas visit to the Philippines in 1992, Feed the Hungry has evolved into a vibrant, volunteer-driven multi-program non-profit charitable organization. It has been among the first responders to natural disasters in the Philippines, and has been involved in relief and rehabilitation, feeding and nutrition, educational projects (scholarships, books, classroom construction), building water systems, gift-giving in orphanages and homes for the aged, livelihood development and poverty alleviation.

Since its inception, FtH has sent approximately 200 million pesos worth of assistance to the Philippines, some of them coursed through the Commission on Filipinos Overseas. This does not include what the volunteers spend on their own travel and living expenses while on charitable missions in the Philippines.

Macabenta relates that the winners of the Alex award were chosen based on their “commitment to the Filipino people both in the United States and in the Philippines, a desire to empower our people and to claim our rightful place not only in the United States but all over the world, and lastly, integrity, which were all truly apparent in the man who inspired this award.”

The winners of the first Alex Esclamado Community Service Award include the Council for Filipino American Organizations of Central Florida, the West Bay Pilipino Multi-Service, Inc., Philippine American Chamber of Commerce of Texas, and the Pilipino American Unity for Progress, Inc.