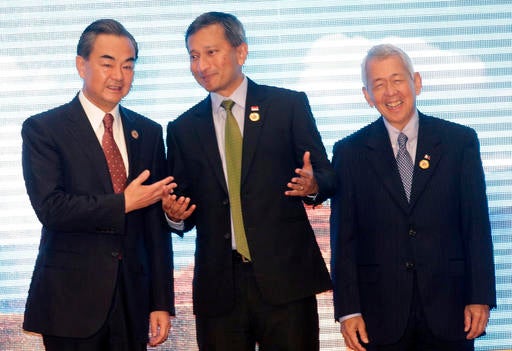 Outgoing Philippine Ambassador to the United States Jose Cuisia and former Foreign Secretary Albert del Rosario yesterday criticized Foreign Secretary Perfecto Yasay Jr. for not standing firmly for the mention of an international tribunal’s ruling against China in the joint statement of a Southeast Asian foreign ministers’ meeting in Laos this week.

READ: Cuisia chides Yasay for failing to get ASEAN behind sea ruling

Speaking at a testimonial lunch hosted by US Ambassador to the Philippines Philip Goldberg, Cuisia said Manila was vindicated by the ruling of the Permanent Court of Arbitration in The Hague that found Beijing’s claims to almost all of the South China Sea had no legal basis and that China violated the Philippines’ rights to fish and explore resources in waters within its 370-kilometer exclusive economic zone.

China, which did not take part in the proceedings initiated by the Philippines, rejected the ruling as “waste paper” and lobbied its allies Cambodia and Laos not to allow mention of it in the joint communiqué of the Association of Southeast Asian Nations (Asean) foreign ministers’ meeting in Vientiane earlier this week.

The Philippines had requested mention of the ruling in the joint statement, but Cambodia, a staunch ally of China, objected, leading to a three-day deadlock that at some point threatened a repeat of the 2012 Asean meeting in Phnom Penh that failed to issue a joint communiqué for the first time in the bloc’s history.

The deadlock was broken on Monday after Yasay dropped the Philippine request for mention of the ruling in the joint communiqué, handing China a diplomatic victory despite the international community’s insistence that Beijing comply with the tribunal’s ruling.

The bloc, which follows an overriding principle of making decisions by consensus, omitted reference to the ruling and said in the joint statement that the ministers remained “seriously concerned about recent and ongoing developments” in the South China Sea and that it was important to avoid militarization of the sea and for freedom of navigation to be maintained.

The statement did not directly refer to China.

“I’m disappointed that Asean did not come out with a unified statement because [the United States], Japan and Australia have supported the ruling,”  Cuisia said.

He stressed that Yasay should have been firm in pushing for mention of the ruling in the joint communiqué.

“Why can’t Asean say that? Is it because we are so afraid to upset China?” Cuisia said.

Cuisia expressed concern about Yasay’s stand for bilateral talks with China without using the ruling as framework for negotiations.

“Frankly, I’m surprised by the glum look of Secretary Yasay when he announced the decision of the arbitral tribunal. He should be very happy about it, we won the case,” he said.

Cuisia said the Philippines  had more than 50 meetings with China to settle the maritime dispute, “but China would always start by saying, ‘We have indisputable sovereignty over those waters.’”

“We did try, but cannot accept it. Now China’s narrative to the whole world is the Philippines never sat down with them. That is totally false,” he said.

Ruling should be promoted

Del Rosario, who fought for the inclusion of the South China Sea disputes in the Asean joint communiqué in 2012 in Phnom Penh, told reporters in an interview that Yasay “should have stood strongly in promoting [the ruling] as part of the  Asean joint statement.”

When sought for comment, Yasay said: “I hope he knows what he is talking about.”

Del Rosario led the Philippine team that made Manila’s case in the Hague tribunal for the invalidation of China’s claim to almost all of the 3.5-million-square-kilometer South China Sea, where $5 trillion in global trade passes every year.

The former foreign secretary  and Cuisia said the government should tread cautiously in holding bilateral talks with China and insist on the arbitration ruling as basis for negotiations.

Del Rosario said he had full respect and confidence in former President Fidel Ramos, who was appointed by President Duterte as special envoy to negotiate with China.

“I think the arbitration ruling should be the focal point in terms of moving forward [in the negotiations with China],” Del Rosario said

If the ruling is set aside, he said, there is nothing for the two parties to talk about.

“So what are you going to talk about? We should be firm with our stand on the ruling,” he said. TVJ