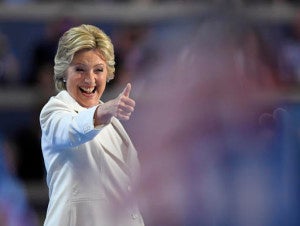 Democratic presidential nominee Hillary Clinton give a thumbs up after taking the stage to make her acceptance speech during the final day of the Democratic National Convention in Philadelphia , Thursday, July 28, 2016. (AP Photo/Mark J. Terrill)

One is bright, optimistic and forward thinking. The other is dark, fearful and backward.

Forget the historic gender issue. The Philippines has had female presidents before, and frankly it was a split decision. One good. One disastrous.

But in America, I liked the answer of Hillary Clinton.

“Standing here, as my mother’s daughter, and my daughter’s mother, I’m so happy this day has come,” she said. “I’m happy for the boys and men, too—because when any barrier falls in America, it clears the way for everyone. After all, when there are no ceilings, the sky’s the limit.”

I love women. But I love women who know that this is about inclusion.

That’s a word Hillary seems to know well in her fight for immigrants and all people of color, unlike Trump who seems to be a Brooklynese “me and youse” guy–where you’re the one who gets used.

American Filipino Irene Bueno, owner of a public affairs firm in DC, was at the convention and could feel the difference.

“Hillary knocked the speech out of the park! Hillary shared her vision for America in positive terms, outlined specific proposals to make our country better and reminded us that as Americans we are stronger when we work together to solve problems confronting our nation,” Bueno told me. “Hillary’s speech was in stark contrast to Trump’s divisive speech in which he scared Americans with dire warnings and failed to propose specific proposals to improve our country.”

I’ve known Bueno for some time. In fact, we ran into each other at a 2008 DNC Clinton party in Denver on the night Clinton threw in the towel. It was a sad night for Clintonistas. Frankly, who knew the 2016 scenario would even be in the cards. Of course, it would, if you know what a fighter Hillary is.

“I have been ready for Hillary for over a decade,” Bueno said. “I had hoped Hillary would decide to run in 2016 but was not sure.  There were times I did not think she would not run for President again. (Tonight) was a very poignant moment for me.  It was a culmination of many years working in support of Hillary and finally a recognition that regardless of your race or gender anyone can be President of the United States.”

It’s just hard to be a person of color or anyone who believes in hope and fairness and not vote for Hillary Clinton.

Now for all the Hillary haters out there, I confess.

She’s not using the middle name anymore. Maybe that’s because it’s a new era. She’s her own woman now. But Hillary always had me at Rodham. Her father, Hugh, was a Navy chief petty officer who became a salesman, then started his own drapery business out of Chicago. And on the Howell side, her mother, Dorothy, was abandoned as a teen and later worked as a housekeeper.

Whatever you think of the woman Hillary Clinton has become (and everyone, it seems, has an opinion), she wasn’t a patrician born of wealth. She didn’t get to Wellesley and Yale Law School because of connections. And then she married a guy from Hope, Arkansas. White privilege? She understood that to mean public service, not make a buck. Her values are straight out of John Wesley, the founder of the Methodist faith:

But I heard it the first time from my Filipino Sunday school teacher at a Wesley Methodist Church near San Francisco’s Japantown.

I heard it again during her acceptance speech at the Democratic National Convention. Hillary showed plenty of policy and attack, and a lot of throat clearing from the podium. It was a speech that set off so many responsive chords in me. All positive. All American. All part of the story you’d expect from the first woman to be president of the United States of America.

But this time, I admit Sanders’ appeal just seemed more important. His Goldman Sachs jabs at Hillary made the point. Mega-money in politics combined with the economic inequality in society was making our democracy a joke. That’s some appeal.

That’s why the most emotional moment for me during the whole Democratic convention was not Hillary’s great speech.

It was really Bernie’s concession. Not his speech from the podium, but rather his emotional remarks after the roll call on Tuesday. It was the simple act of declaring the suspension of rules to allow for Hillary to be the nominee by acclamation.

That was as graceful and as magnanimous as it gets in American politics.

And that was worth a tear or two.

In this gridlocked, extremely partisan, take-no-prisoners, negativity-infused modern day of big money politics, when Sen. Ted Cruz couldn’t even endorse Donald Trump at the Republican convention, it was like a new day had come in politics.

We can still fight and bicker, and then after some platform concessions, vow to work together toward a better future.

And she hit all the points, invoking FDR rather than Darth Vader.

It was really an old-style traditional Democratic speech. She spoke of the kind of infrastructure spending that creates jobs, the kind of thing that marked Bill Clinton’s years. All the economic issues. Minimum wage. Equal pay. And big money out of politics.

So she appealed to Bernie and his supporters. And then she did her Trump Dump.

Marco Rubio talked about Trump’s small hands and the GOP nominee started talking about his manhood. No class.

This was class–Hillary quoting Jackie Kennedy talking about the Cuban Missile Crisis. “She said that what worried President Kennedy during that very dangerous time was that a war might be started–not by big men with self-control and restraint, but by little men–the ones moved by fear and pride.”

But she made the stark contrast just a few seconds earlier.

“Imagine, if you dare, imagine, imagine him in the Oval Office facing a real crisis,” Hillary said of Trump. “A man you can bait with a tweet is not a man we can trust with nuclear weapons.”

If you saw both Hillary’s and The Donald’s speeches, it’s hard not to find Hillary more alluring from all sides.

She was centrist and inclusive.

If you’re a Bernie supporter and you think she’s too far to the right, well, she’s just defined a new big middle.

Because if there are Republicans who find it distasteful to hold their nose and vote for Trump, now they can dump the nose clip.
It’s hard to imagine a winning campaign slogan like, “We smell less bad,” but that may have to do if Hillary expects to woo a few moderate Republicans.

What we saw on Thursday was the emergence of a new governing middle. It’s a Democratic Party, with some transplants from the right, infused with an essence of Sanders.

Smashing the glass ceiling was good. But breaking through the barrier of political gridlock, the thing that makes people hate politics, may ultimately prove to be even more important.

Emil Guillermo is a journalist and commentator who writes from Northern California. Follow him at http://www.twitter.com/emilamok http://www.amok.com