Cuisia chides Yasay for failing to get ASEAN behind sea ruling 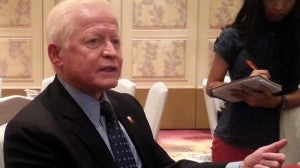 Philippine Ambassador to the US Jose Cuisia Jr. INQUIRER.net/Matikas Santos

MANILA — Outgoing Philippine ambassador to the US Jose Cuisia criticized Foreign Affairs Secretary Perfecto Yasay Jr. for failing to push for the inclusion of an international court’s favorable ruling on the South China Sea dispute in the Asean joint communiqué despite strong global support for the Philippines’ case.

The Permanent Court of Arbitration in The Hague, Netherlands, ruled in favor of the Philippines’ territorial rights to control, develop and tap the resources of islands and the surrounding waters in the West Philippine Sea (which overlaps with the South China Sea), which have fallen within its exclusive economic zone under the United Nations Convention on the Law of the Sea (UNCLOS).  It has also ruled that China’s nine-dash claim has no legal and historical basis.  The arbitral tribunal’s decision boosts the global support for the Philippines and the other members of the Association of Southeast Asian Nations to peacefully settle maritime and territorial disputes based on the rule of law.

Cuisia urged Filipino and American businessmen to weigh in on the situation in the West Philippine Sea, saying: “ No single country should jeopardize the region’s peace and security.”

“We were vindicated by the decision of arbitral tribunal but I’m disappointed that Asean did not come out with a unified statement because US, Japan and Australia have supported the ruling,” said Cuisia in a testimonial lunch hosted by US ambassador to the Philippines Philip Goldberg held at Fairmont hotel in Makati City.

“ I think he (secretary Yasay) should be very happy with that,” said Cuisia.  SFM