US Coast Guard ship turned over to PH in Alameda, Calif. 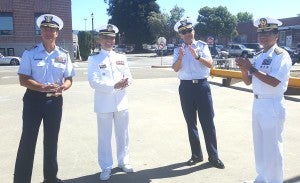 United States Coast Guard Cutter Boutwell (also known as high endurance cutter WHEC 719) was formally decommissioned by USCG officials on March 2016 in San Diego, California “after 48 years of distinguished service to the United States Coast Guard entered the fleet in 1968 … and (is now) transferred to the Philippine Navy,” according to Rear Admiral Joseph M. Vojvodich, the Coast Guard’s assistant commandant for acquisition and chief acquisition officer.

FEATURED STORIES
GLOBALNATION
In slap on face of PH, China replies to Locsin on tribunal ruling: It’s invalid
GLOBALNATION
PH town given power to name sandbars to assert sovereignty vs China
GLOBALNATION
The Chinese doctor who battled COVID-19 in Wuhan and Philippines

The 378-foot Boutwell, the longest-serving cutter named after the former Secretary of the Treasury George Sewall Boutwell, was described by Vojvodich as “a fierce combatant of transnational crime, protector of living marine resources, safe haven for those in distress, and ambassador of global maritime cooperation.”

In 1998, it made a record-setting seizure of 72 tons of marijuana and in 2005, it seized 14,000 tons of cocaine. “Boutwell will continue to execute vital maritime mission (and) serve the Philippines in its struggle to protect freedom of the seas, protect life, (among others),” Vojvodich announced. 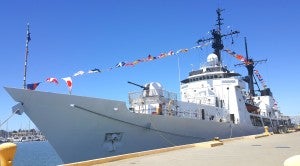 In accepting the ship, Commander Philippine Fleet Rear Admiral Bayani Gaerlan stated that, through the EDA program, these U.S. assets will continue to strengthen and boost the Philippine Navy’s posture and credibility addressing, alongside the Armed Forces of the Philippines, security concerns such as territorial integrity, maritime security, natural and man-made disasters and even internal security.

“Further, her capabilities will be significant in expanding the non-traditional maritime stress such as maritime terrorism, smuggling, illegal fishing, human and drug trafficking to name a few,” Gaerlan noted as his wife, Lucille Gaerlan, listened.

In an interview later, Gaerlan acknowledged that they did not expect to have the turnover this early, even after President Barack Obama himself announced the approval of its transfer when the US president went to the Philippines last November.

Gaerlan also boldly agreed that it is very timely that cutter Boutwell was turned over when “we are supposed to be protecting the West Philippine Sea.  The international tribunal court, through the Permanent Court of Arbitration released a decision just recently (in favor of the Philippines), which I think is very vital. The role of the fleet is of course to provide that. We have different area commands so where the ship is needed, we provide the ship in areas it may needed like the West Philippine Sea.”

Gaerlan added: “Like the previous two cutters or frigates, mostly the deployment of this is the West Philippine Sea which may be contested waters; but based on the United Nations Convention on the Law of the Seas (UNCLOS), 200 nautical miles from our territory is ours being part of our exclusive economic zone (EEZ) most of islets there are within that range.”

“Acquiring the Boutwell is very significant because the bigger ships in the inventory of the Philippine Navy are not that durable anymore out at sea. So this is an added capability for the Philippine Navy that can be out to patrol at sea for thirty straight days,” Gaerlan explained. 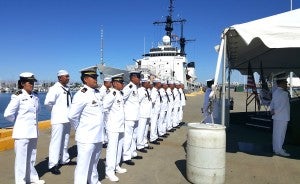 Philippine Navy officers and crew led by Captain Brendo Casaclang prepare to board what would become BRP Andres Bonifacio before it was formally turnedover to Philippine authorities. JUN NUCUM

Outgoing commanding officer of the ship Capt. Matt Gimple intimated in an interview that the Boutwell is in excellent condition, and he could not be more pleased with the crew and the captain “who are outstanding seafarers and mariners” that he is turning the ship over to.

“Turning over Boutwell is bittersweet. Boutwell has served a long and distinguished career with the U.S. Coast Guard with many lives saved and has done much good work in terms of taking transnational crimes off of waters. And I know that it means a lot for us to know that it will be in the service of the Philippine Navy in continuing that proud tradition,” Gimple disclosed.

Vojvodich also had mixed feelings to have to turn over USCG Boutwell, a capital asset that served the coast Guard well for a long time. Boutwell is “like a home. It has a lot of memories growing up, working with shipmates,” he said.

“On the other hand, we have this very vital partner, the Republic of the Philippines. So turning it over to these professional sailors who understand maritime environment and who have common goals that we have for security, safety, good governance in maritime, having a partner use that asset now is remarkable,”

Vojvodich added. “This world is very complex and no nation can do alone. No nation has enough resources or military might will be able to resolve the complexities and challenges. So it is very important to do this sharing of assets to those strong, committed, capable partners and allies that we have common objective with. Turning over this vessel is timely (considering these times of uncertainties). It is even more important to depend on each other.”

USCG Chief of International Acquisition Tod Reinert USCG chief of International Acquisition, the office that handles the process EDA program transfers disclosed that the Secretary-class 378-foot high endurance cutter Boutwell has a current book value of about $8 million of the original acquisition value of about $80 million. It is a grant, free and essentially a gift from the U.S. government to the Philippine government.

Reinert explained that the Philippines won over about five candidate countries that included Bangladesh and Nigeria and that the decision on whom to give an EDA asset like Boutwell is made through an inter-agency coordination group led by the State Department, Secretary of Defense for Policy and the Coast Guard, among others who take a vote on who gets the ship.

The ship will need to be installed with navigation and communication equipment and there are some upgrades that the Philippine Navy wants to accomplish in the US for some system upgrades. The Philippine Navy is investing about $16 million to upgrade and outfit the ship, and training the crew to operate it for the voyage back to the Philippines.

“In the end they received a substantial saving of about $21 million worth of equipment,” Reinert bared. “The U.S. Coast Guard benefits because we are saving about $12 million with each of these cutter transfers in what would have cost us to dispose of the ships. The industry partners get some benefits as well because most of that work in outfitting of the ship will be done here in the U.S.”

However, Reinert also admitted that the Boutwell is an old ship whose spare parts are hard to find since a lot of equipment vendors are out of business or no longer make the parts that support the equipment onboard the ship. The equipment is being upgraded to new and supportable modern components. 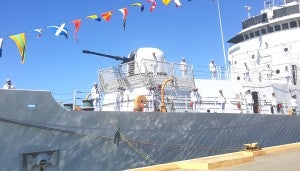 BRP Andres Bonifacio remains docked at the Coast Guard Island in Alameda California for at least a month while Philippine Navy officers and crew undergo training to familiarize themselves with the ship before they sail to Philippine shores. JUN NUCUM

Home port to be determined

“It does not have any home port yet but it will be strategically placed anywhere it may be needed. Usually when a vessel like this reaches the Philippines, it goes to either Manila or Subic Naval Base in Zambales,” Casaclang continued.

“We will undergo training and for that, based on our timeline, we will be staying here until October and by then I hope we will be ready to sail home to the Philippines that may take another month including port calls and refueling. My first mission is to sail this ship safely to the Philippines.”

Retired Filipino US Coast Guard veterans in attendance rejoiced that BRP Bonifacio is now with the Philippine Navy.

“It is extremely important that the Philippines is the recipient of the cutter, especially with the issue going on with China and all. It will be a great help as this will be a deterrent. It is good timing that the turnover happened today as it is a good addition to the Navy fleet. They need a lot of training though,” Rolando Soria stated. Tony Lapaz, Loy Sison, Ernie Andales and Ramon Galapate echoed Soria in saying that the turnover is another good addition to the Philippine Navy.