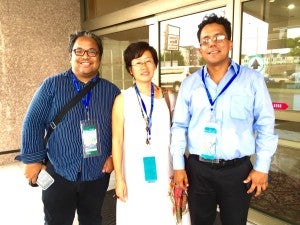 PHILADELPHIA, Pennsylvania — Outside the Wells Fargo Center here, Rong Xiaoqing, a reporter for the national Chinese-language Sing Tao Daily, took a photograph of a throng of Bernie Sanders’ supporters, protesting and chanting, “A vote for Hillary is a vote for Trump!”

Not intimidated by the US Secret Service guards carrying high-powered guns, Xiaoqing stopped in the middle of the road and, before walking towards the hall where the delegates were, took another shot with her iPad. She was just doing her job, getting the news for her community.

Amid the spate of police shootings in a number of states across the country, hate crimes and anti-immigrant rhetoric from the conservatives, the coverage at the Democratic National Convention of journalists from the ethnic press, like Xiaoqing, comes at a crucial time for minorities.

“Most especially this year, it is very important for us to be part of this major national [political] event. The xenophobia is horrific,” Xiaoqing said.

“Candidates and party leaders need to be held accountable for their words [and actions]. No one is at a better position than the minority press [to report them],” she added.

For four days, a delegation of reporters from various media outlets that serve ethnic and minority communities were here at the convention halls and caucus rooms, asking questions and standing side by side with major American and foreign news outlets around the world. The delegation was organized by New America Media, with support from the Dodge Foundation.

“This is very powerful, to feel the atmosphere here, to see these people fighting for what they believe in,” said Xiaoqing.

This is the first most of these reporters to be at political conventions. But it is certainly not their first to cover stories about Democratic presidential nominee Hillary Clinton.

Yet, for most reporters from ethnic media, credentials for the largest political events such as the DNC and RNC are still hard to come by. This, despite a study conducted by pollster Sergio Bendixen that says about 60 million people access ethnic media as their source information. 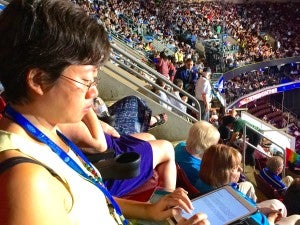 Rong Xiaoqing writing her story on her iPad at the Wells Fargo Center, during the Democratic National Convention in Philadelphia, Pennsylvania. ANTHONY ADVINCULA

Momar Visaya, editor of an English-language Filipino weekly, The Asian Journal, based in New Jersey, juggled his time between meeting the deadline for this week’s edition and running after Asian Americans and Pacific Islander elected officials, delegates and community leaders.

“I think I need to change my phone soon,” he said, as if running out of battery would be a disaster at the moment.

Spending many hours at the media pavilion here, Visaya took photographs and worked on his stories with his cell phone.

“[Yes], witnessing the political history of America happen firsthand is an extraordinary experience, he said.”

“In an election cycle that looks to evoke emotional responses versus fact-based analysis, it is critical for the media like us to report and bring this information to the public,” said Derek Ware, reporter of GlocallyNewark.com, an online community publication.

As his first national political convention, Ware felt that his participation was more significant for African Americans and all minority audiences.

“An informed and engaged community is essential for a democratic society,” he added. “With so many communication outlets, many individuals just hear and read statements that fit their views and existing biases.”

Ware pursued stories about the delegates from New Jersey and New York, looking at how they think about the Democratic Party, as Pres. Barack Obama’s second term is coming to an end.

“Is it [Democratic Party] unified, fractured or diverse?” he asked. 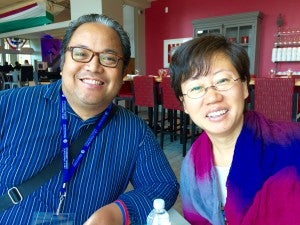 Kleibeel Marcano, a senior editor of a New Jersey-based Spanish-language weekly, Reporte Hispano, could not believe when he was standing in the bleachers, a few feet away from the stage, at the Wells Fargo Center here.
“It was a crazy experience for me,” he said, his face beaming with excitement.

At the convention, Marcano worked on his stories about diversity in the Latino delegation–Mexicans, Dominicans, Puerto Ricans–from New Jersey.

“As part of the Hispanic press, having an opportunity to cover the Democratic National Convention, we have been able to cover the issues that most affect our community at a national level,” he said.

“Our reportage shows political leaders the [voting power] of the Latino community and that the [social] issues that we face should be taken into account for a more effective decision-making process.”