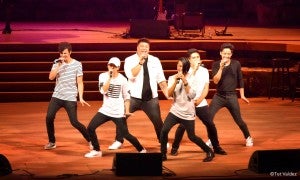 The Filharmonic in action at the John Anson Ford Amphitheater in Los Angeles. TET VALDEZ

HOLLYWOOD –The $66 million renovated John Anson Ford Amphitheater along Cahuenga Pass opened its doors this month for selected performances including the renowned The Filharmonic and Harana Men’s Chorus.

Set in a 32-acre Los Angeles County Regional Park, which is located across the Hollywood Bowl along the historic Cahuenga Pass, “The Fil-Am Collective Show” July 24 offered a nostalgic collection of Original Pilipino Music (OPM), some hip-hop and Top 40s hits performed by the two Filipino groups that have recently earned local and worldwide acclamation from diverse audiences.

Under a comfortable open air seating, the show featured the Los Angeles-based a cappella group The Filharmonic, semi-finalists in NBC’s hit musical competition “The Sing-off.” It landed a big role in the hit movie “Pitch Perfect 2.”

The members of the the Filharmonic — VJ Rosales, Joe Caigoy, Trace Gaynor, Barry Fortgang, Jules Cruz and Niko del Rey — did not disappoint the multigenerational patrons as they dished out their own version of Earth, Wind and Fire’s “September.”

Young and old members of the audience stood up to dance to their rendition of Billboard’s favorite “Shut Up and Dance,” hip hop “No Diggity,” “Sugar” and “One More Night.” Their video appearance on the “Late Show with James Corden” (CBS) competing with “Pitch Perfect 2” star Anna Kendrick has become viral with over 2 million hits.   Their video of “Flashlight” has received more than 3 million hits by now, according to bass vocalist Jules Cruz.

The group credited producer and singer Annie Nepomuceno and her husband Ed, for inspiring them to continue to promote Philippine arts and culture outside of the Philippines. Proving that international popularity has not diminished their loyalty to their kababayans, they included Rihanna’s reggae -inspired “Work” in their repertoire, premising the song with a question during their performance: “What is the most common profession of Filipinos abroad? 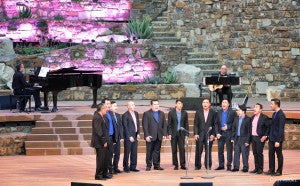 “What brought you to the Ford?” was a common question Filipino Americans asked one another. They filled the theater to a capacity.

“I came here because I heard The Filharmonic would be performing and I’d like to see them in person after watching them perform in “Pitch Perfect 2,” said Amy Bardelosa from Northridge.

The iconic amphitheater built in the 1920s has recently attracted many Filipino American audiences having hosted performers from the Philippines together with other notable well-screened mainstream events.

Its brochure states: “The Ford Summer Season was designated by Board of Supervisors to be a major venue to allow music, dance and theatre groups in LA County.   Each performing group is selected through a competitive application process, receiving front of the house, production, and marketing support as well as the majority of the box office proceeds”.

It seats more than 1,200 patrons and its acoustics derive from the surrounding hillsides and trees.   The lighting provided a backdrop of waterfall effect that accompanied every nuance of melody from the performers. Theater-goers appreciate the new sound barrier that muffles the noise from the adjacent busy 101 freeway.

The Harana Men’s Chorus was featured in Act 2 of the show. Their repertoire appealed to the homesick: “Harana Medley” including “Dungawin mo Hirang,” “Ay o Pag-ibig.” Their rendition of Apo Hiking Society’s staples was a hit with the audience (“Mahirap Magmahal ng Syota ng Iba”; “Panalangin,” among others). Annie Nepomuceno’s arrangement of The Beatles’ “Can’t Buy me Love” and others was among the night’s favorites. 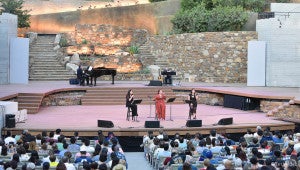 “The Fil-am Collective Show” was opened by veteran singers Cecile Rojas Azaret, Sharon Rose Orosco and singer composer Nepomuceno. Azaret is a session vocalist in the Philippine music industry; Orosco is a Christian Contemporary vocalist who also sings with the Orange County Pacific Chorale; and Nepomuceno, besides being the producer-director of the show, is a soprano soloist and winner of the Awit Award in the Philippines.