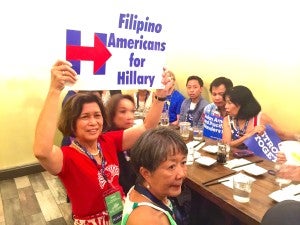 Loida Nicolas Lewis and other Fil-Ams at the Democratic National Convention in Philadelphia. ANTHONY ADVINCULA

PHILADELPHIA, Pennsylvania –They had rallied behind Hillary Clinton the first time she tried to run for U.S. president, in 2008, despite her defeat to Pres. Barack Obama in the primary elections. And they had backed her, undeterred by controversies and criticism, during her hearing on Benghazi before a national audience.

But at the Democratic National Convention here, Filipino American voters, supporters and delegates triumphed with Clinton in a historic moment when she became the first woman to clinch the Democratic presidential nomination on Monday night.

“I have been waiting for this day,” said Francis Stevens, a Filipino American delegate from Virginia. “I’m deeply honored to be here for Hillary, and I’m so happy that [Governor of Virginia] Tim Kaine is her running mate.”

Stevens, who was born in Sampaloc, Manila, to a Filipino mother and an American father and moved to the United States when he was 12 years old, said that his presence, along with other Filipino American voters, at the DNC tells a lot about the community’s growing involvement in the political process. 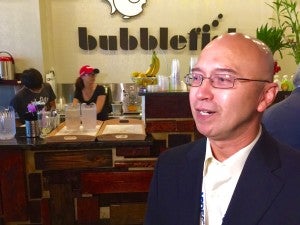 “You know, we’re not very good at participating in politics. We’d rather go to fiestas, gatherings and parties,” added the 54-year-old Stevens, a former city council official in Petersburg, Virginia, and currently serving as a police officer. “It’s time to change that.”

Some prominent Filipino American elected officials and leaders also showed up at the convention to express their support for Hillary Clinton.

“I’m just proud to be part of the Filipino American delegation,” Assemblyman Robert Bonta, the first Filipino American elected to the California State Legislature, said at a luncheon gathering on Tuesday at a restaurant here. “It has been great to see new and old faces—a very positive sign.”

A recent study conducted last May by the Asian Americans Advancing Justice, Asian Americans and Pacific Islander (AAPI) Data and AAPI Vote showed that Filipino American voters, once known for having conservative political views, have shifted in party identification towards the Democratic Party.

“This election is very important to our life as Filipino Americans because somebody, from the other party, is a demagogue, a congenital liar and is very much involved with himself,” said Loida Nicolas-Lewis, a high-profile Filipino American business woman and community leader, endorsing Clinton. “But, with Hillary, she’s been with us fighting for children, women, the disabled – and for education and higher wages.”

Holding up a banner that says “Filipino Americans for Hillary,” Lewis believes that electing Clinton will largely help the estimated four million Filipinos in the United States.

And despite the low turnout of Filipino American voters in previous elections, Lewis says that there is a silver lining — the fact that Filipino Americans are becoming Democrats, “though there is still much work to be done.” 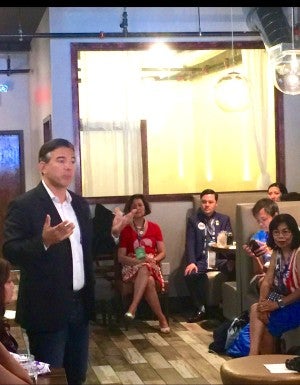 “About 50 percent of voters are first-generation immigrants, so our thoughts are still focused on the Philippines. It does not matter who the [U.S.] president is, as long as we have a job,” she added. “But this election is really a choice between good and evil — and who is good for Filipino Americans and who doesn’t know Filipino Americans,” Lewis added.

For younger Democratic Filipino American voters, this election comes at a critical point.

“Having the opportunity in front of us to make history, everything matters,” said Ben de Guzman, 43, of the Washington, D.C.-based Filipino Americans for Progress.

“It’s really important that the Democratic Party is the one that stands up against discrimination and hateful rhetoric that, unfortunately, has led to a lot of violence. The issues — such as health care, immigration, education — that matter to Democrats resonate clearly with Filipino Americans.”