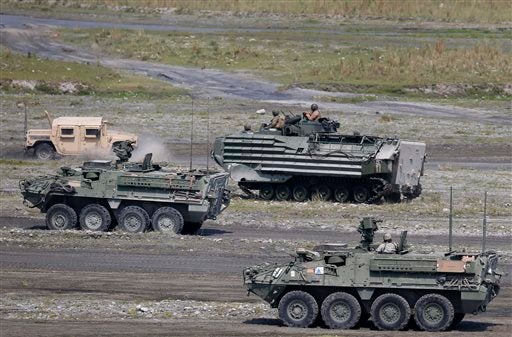 A militant group on Wednesday urged President Rodrigo Duterte to terminate the Enhanced Defense Cooperation Agreement (Edca), a day after the Supreme Court upheld its constitutionality as an executive agreement aimed at boosting military cooperation between the Philippines and the United States.

Bagong Alyansang Makabayan (Bayan), one of the petitioners that questioned the high tribunal’s decision last January declaring Edca’s constitutionality, called the agreement as “lopsided” and “imperialist.”

“We condemn in the strongest terms the SC decision upholding the legality of the Enhanced Defense Cooperation Agreement.  The decision came on the day US Secretary of State John Kerry is scheduled to visit the Philippines. The timing of the SC decision is reminiscent of the moment EDCA was signed in 2014, in time for US President Barack Obama’s first visit to the Philippines,” Bayan secretary general Renato Reyes said in a statement.

“Edca allows the return of US bases and facilities, without rent, with tax exemptions and under exclusive US control. The new bases will mean permanent US military presence in the Philippines. It turns the country into a colonial military outpost for US imperialist intervention in the region,” he added.

Kerry paid a courtesy call on Duterte and faced Philippine media on Wednesday, saying that the Edca will help modernize the Armed Forces of the Philippines “in order to help them to be able to increase their effectiveness in responding to 21st century threats. This is amid an international tribunal ruling affirming the country’s plea against China’s claims to almost all of the resource-rich South China Sea.

Reyes said Duterte does not need Edca to assert the country’s interest in the West Philippine Sea because “there is already a ruling by the Permanent Court of Arbitration.”

“We call on the Filipino people to actively resist the return of US bases and facilities which is an affront to our sovereignty. We call on President Duterte to assert national interest and terminate the Edca because it is a lopsided agreement… He need not seek the involvement of the US and further escalate tensions in the region,” he said.

“Duterte is correct when he seems to promote an independent foreign policy. Edca is an imperialist imposition that undermines this. As an executive agreement, according to the SC, it is now within the power of Duterte to terminate the Edca,” Reyes added.

On the same day Kerry arrived in the Philippines, the Supreme Court dismissed an appeal on its earlier decision upholding Edca’s legality, ruling that it was an executive agreement that seeks to expand the Visiting Forces Agreement, does not require Senate concurrence. TVJ