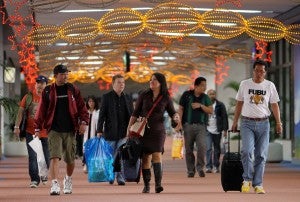 MANILA — The Bureau of Immigration (BI) warned the public on Wednesday, against the activities of a human trafficking syndicate that has been illegally recruiting Filipino women for work in China.

Immigration Commissioner Jaime Morente issued the warning after Chinese immigration authorities recently deported back to Manila a Filipina who was victimized by the syndicate and was detained for two months in Beijing.

The victim, whose name was withheld due to a prohibition in the anti-trafficking law, arrived at the Ninoy Aquino International Airport (NAIA) Terminal 2 and recounted her ordeal to the Bureau of Immigration (BI) officers.

She said she and her employer, a Chinese woman residing in Manila, whose name was also withheld so as not to jeopardize pursuit operations, left the country for China on Oct. 15, 2015.

She narrated that upon arriving there, her employer left and abandoned her at her workplace and returned to Manila without bothering to secure a visa extension or working visa for her in China.

As a result, she said she was subsequently arrested and detained by Chinese authorities for being an illegally staying alien.

After her release from detention, she sought the help of the Philippine embassy in Beijing, which provided her with a travel document that she used in returning to the Philippines.

Morente has ordered the BI intelligence division to launch a manhunt for the Chinese woman who recruited the victim and is suspected of being a courier for a human trafficking syndicate based in Manila.

He declined to divulge the suspect’s identity so as not to preempt the operation for her arrest by BI operatives.

“We will detain and later deport her for being an undesirable alien,” Morente said, adding that the foreign suspect has been frequenting the country and has been using a working visa which the bureau would soon cancel.  SFM