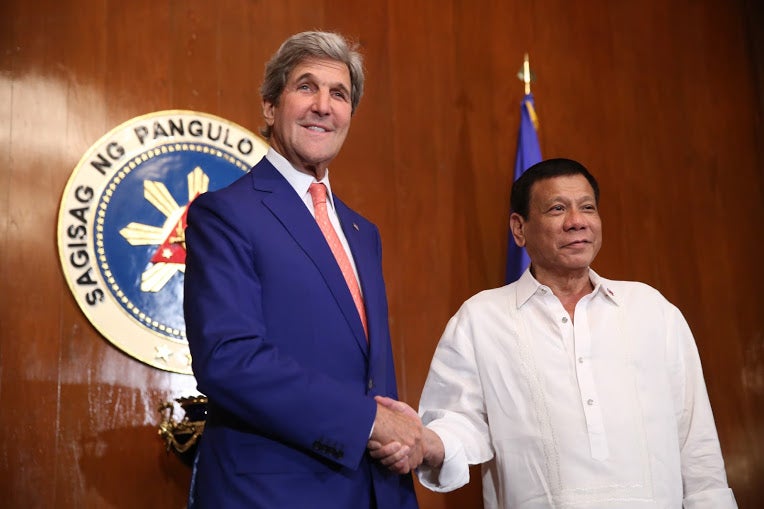 President Rodrigo R. Duterte meets with US Secretary of State John F. Kerry during a courtesy call at the Malacañan Palace on July 27, 2016. KING RODRIGUEZ/PPD

“The Edca agreement will also expand opportunities for our militaries to train together and that will help to modernize the Armed Forces of the Philippines in order to help them to be able to increase their effectiveness in responding to 21st century threats,” he told journalists during a joint conference with Foreign Affairs Secretary Perfecto Yasay Jr.

On Tuesday, the same day Kerry arrived in the country, the Supreme Court dismissed an appeal on its earlier decision upholding the constitutionality of the Edca. It ruled that Edca, an executive agreement that seeks to expand the Visiting Forces Agreement (VFA), does not require Senate concurrence.

One of the petitioners, Bagong Alyansang Makabayan (Bayan) secretary general Renato Reyes Jr., questioned the timing of the decision, pointing out that the actual signing of the Edca in 2014 also coincided with the visit of US President Barack Obama.

Bayan and other groups claim that the Edca, which allows US forces to use Philippine military bases and facilities, is a “lopsided agreement.”

During his speech, Kerry said that the two countries have been working together to counter extremism.

“Unfortunately the Philippines is no stranger to the threat of terrorism. This nation has been managing these threats by groups like Abu Sayyaf for some period in time. Our nations work very closely together in order to counter those threats,” he said.

“In addition, the US-Philippines Mutual Defense Treaty (MDT) has been a cornerstone of security in the region for decades,” Kerry said. “And the Edca not only helps us coordinate our efforts to maintain peace and stability in the region but it also allows the United States to provide rapid assistance to the Philippines in the event of an emergency.”

He said the Edca, which expands the MDT, enables the US to proposition humanitarian relief supplies in the Philippines.

“I personally saw the firsthand importance of this disaster response when I visited Tacloban very soon after the devastation of typhoon Haiyan (Yolanda). And I saw unbelievable destruction that that typhoon wreaked on that community,” he said.

He met with President Rodrigo Duterte later in the day to discuss Philippines-US cooperation. In his speech, he said the relation of the two countries was a “deep friendship” rooted in history and support for democratic systems.

The secretary said the two countries’ future prosperity and security go hand in hand, especially with a quarter-million Americans living in the Philippines and around 4 million Filipinos living in the United States. RAM