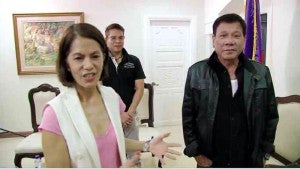 In this June 22, 2016 file photo, Regina Lopez is seen meeting with President Rodrigo Duterte about his offer for her to head the Department of Environment and Natural Resources (DENR). She is now the environment secretary. (INQUIRER FILE PHOTO)

STA. CRUZ, Zambales — President Duterte has good intentions for not honoring the historic Paris agreement on climate change, which the Philippines adopted along with about 200 countries in December last year, according to Environment Secretary Gina Lopez who was here on Tuesday.

“I haven’t talked to him (President) yet, but I’m sure he has good reasons for [making that decision],” Lopez told reporters here after speaking in a forum organized by anti-mining advocates.

Calling the the international covenant signed by countries that participated in the 21st Conference of Parties in France as “stupid” and “absurd,” Mr. Duterte said the treaty would limit the country’s industrial growth.

Lopez said she believed Mr. Duterte’s remarks were “for the common good of Filipinos.”

“What I feel is that his love for Filipinos is non-negotiable,” Lopez said. “The environment is his concern, too… People should not worry about it because I’m sure the President decides what’s good for the country.”

Lopez, a staunch environmental advocate, said she supported Mr. Duterte despite his decision to ignore the climate change pact.

Lopez visited this mining town to listen to a clamor from residents for an end to what they described as “destructive” mining activities in the town.

Sta. Cruz is host to four mining operations, which Lopez recently suspended for failing to comply with environmental safety standards.

She addressed about 1,000 residents in a forum organized by environmental groups and attended by other officials of the Department of Environment and Natural Resources.

Lopez said she would look for ways to alleviate poverty in this town.

“We have a national greening program, [which is] not just [about] planting trees but [developing] agro-forestry. I want each greening program to be an economic stimulus like we did in the La Mesa watershed,” she said.

The Supreme Court also issued a writ of kalikasan in favor of a community in Sta. Cruz, to address an environmental complaint regarding mine-related pollution affecting the town.  SFM