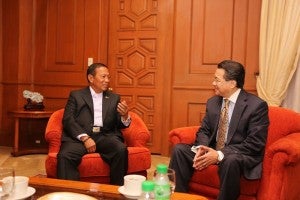 In this March 16, 2014 file photo, then vice president Jejomar Binay meets with Vietnam’s Ambassador Truong Trieu Dong, who expressed his country’s support for the arbitration case file by the Philippines against China over the West Philippine Sea. (Photo courtesy of the Office of the Vice President)

MANILA — The Asian country known to face down global superpowers has some advice for the Philippines on how to deal with the West Philippine Sea dispute with China — and it involves pressing several pressure points.

Vietnamese Ambassador to the Philippines Truong Trieu Dong graced a forum on Tuesday with the Association of Generals and Flag Officers at the Armed Forces of the Philippines (AFP) headquarters in Camp Aguinaldo, Quezon City, gamely answering queries regarding Vietnam’s experience grappling with China’s excursions in their territorial waters.

“Dealing with China for thousands of years, we understand China. We know what China is thinking and doing, and to what extent it can [act] and when it has to stop. And how to stop them,” the ambassador narrated, when asked about the incident with China in 2014 when the superpower had sent a giant oil rig into Vietnam’s waters–but eventually backed off.

“First, we always maintain a diplomatic dialogue with China. We never cut it off in any situation…which means we can negotiate,” the ambassador began.

“Second, we held a public campaign against the actions of China in Vietnam, and for international support against that very blatant act against our territorial waters,” he added.

The ambassador said they viewed the oil rig as China’s “test” for the international community and Vietnam.

“So we used many different measures to push, bring pressure on China…and China had to withdraw this oil rig,” Dong  said.

“I, myself, think we are rather unfortunate to be the neighbor of too big, too ambitious a country. Therefore, it is a painful lesson for us already that if you are not strong enough, you cannot defend yourself. That is why for Vietnam, we try to beef up our military strength,” the ambassador said.

Dong, a former soldier, advised that given the Philippines’ archipelagic geography “the Philippines should strengthen first the Navy, and second, the Air Force.”

He also urged increased defense cooperation with Vietnam, and advised the country to “unite” with other ASEAN countries affected by China’s “nine-dash-line.”

“In ASEAN, there are four or five countries which are now having problems with the claim of China over the South China Sea, and the Philippines, with Vietnam, has been trying to mobilize all those four other countries…to come together, work together as a force, and with that, talk with China,” the ambassador said.

“Vietnam and the Philippines are working hard and close together to make that workable. But it is not very easy. Malaysia is becoming more active with this idea, but for one other country–Brunei–is still hesitant to join,” Dong said.

Asked how they view the Philippines’ close defense partnership with the United States, the Vietnamese ambassador said: “For us, any agreement, whether defense or military agreements, between countries, if it is for the peace and security of those countries, it is always welcomed by Vietnam. So long as it serves the interest of peace and sovereignty of everybody.”

Dong, however, said Vietnam has always been, and would remain for “the peaceful settlement of disputes in the South China Sea…on the basis of international law…without resorting to the threat or use of force.”

“We are determined to explore all possible peaceful measures including legal tracks to settle all disputes,” Dong said.  SFM