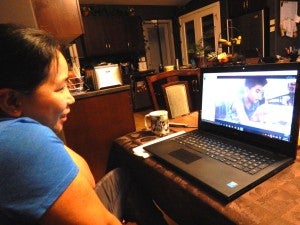 Joy Santos, a caregiver in Calgary, Alberta, during an online chat with her son in the Philippines. JHONG DE LA CRUZ

RED DEER, Alberta – Canada’s border services authorities are warning caregivers that they would face consequences for violating immigration laws, notwithstanding the abusive situations they may find themselves in.

The Canada Border Services Agency (CBSA) urges caregivers to lodge complaints against their employers before Canada’s immigration ministry if they feel abused, instead of accepting “under-the-table” jobs as “Band-Aid” solutions to their employment problems.

Caregivers face being sent home the like the 19 caregivers who recently suffered the consequence following tips and complaints and subsequent investigations by the border services agency.

Tips and complaints about misuse by some nannies of the Live-in Caregiver Program (LCP) had pushed CBSA Pacific Region in 2014 to start a data file called “Project Guardian.” The region covers the western provinces of British Columbia and Yukon.

CBSA collates tips and complaints about alleged Caregiver Program infractions by nannies, and “Project Guardian” is its tool for keeping track.

The agency has undertaken 40 investigations that have led to 19 removals and five voluntary departures from January 2014 to June 2016.

“It is part of regular core business for the CBSA in enforcing the Immigration and Refugee Act (IRPA),” said Robin Barcham, agency spokesperson, in an email interview with INQUIRER.net.

Barcham clarified that there is no special investigative project into the LCP in B.C. and Yukon. 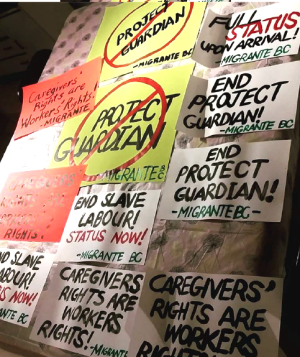 She said that as in any credible tips and complaints, an assigned officer would conduct an investigation to determine if a foreign national is in violation of the IRPA.

Financial obligations either to their families or recruitment agencies, or both, are a common reason why caregivers enter illegal set-ups, said Erie Maestro, Migrante B.C. spokesperson.

“These caregivers are often saddled with debts from employment agencies, banks or from their families,” Maestro said.

In cases where caregivers choose to leave their employers because of abuses, or were simply let go, they are forced to accept under-the-table jobs just to support their own needs and their families.

It is during this transition period of waiting for a new employer that caregivers are most at risk because the process could take up to a year, if a new employer is willing to pay the $1,000 market test fee, Maestro said.

Irene (not her real name), 24, arrived in a city in Alberta to work for a family in 2013. At yearend the family decided to let her go. She later found an employer who required her service while waiting for a permit from the government; but things did not fall into place because the employer was laid off.

Her present employer took almost six months to hire her legally, but she had already been working for the family while waiting for the paperwork to be approved. All in all, it had taken Irene almost two years without a status, working under-the-table for two prospective employers.

However, while Project Guardian was implemented to watch and detain erring caregivers, there is a lack of initiative to do the same for abusive employers, Maestro argued.

In the 12 cases handled by the West Coast Domestic Workers’ Association (WCDWA) related to investigations done under the Project Guardian, none of the employers or recruiters involved were interrogated, although CBSA had evidence that the caregivers were illegally employed, noted Natalie Drolet, executive director of WCDWA.

“Caregivers are not free to simply change employers if they are being abused like permanent residents and Canadians are,” said Drolet.

“In addition, in some cases, these caregivers may be victims of trafficking for labor exploitation,” she added.

“CBSA does not screen caregivers accused of unauthorized work under Project Guardian for trafficking, and this is a huge problem because there may be protections available to her through IRCC (Immigration, Refugees and Citizenship Canada),” she said, explaining that a common tactic traffickers use is to force caregivers to work outside the confines of her work permits.

Advocacy groups have tagged the investigations as “raids,” based on the experiences of caregivers complaining about how CBSA officers have carried out their investigations.

“Under this initiative, CBSA officers are showing up unannounced at caregivers’ homes and interrogating them about their work history and immigration status,” said Drolet, also a staff lawyer with WCDWA.

“Caregivers are not told of their rights – that they do not have to answer the officer’s questions, or that they can speak to a lawyer,” she added.

Cases handled by WCDWA revealed caregivers experiencing shock and intimidation, leading to difficulty in properly answering questions by CBSA officers. The officers were also mistaken as policemen because of their black uniforms and guns.

“They did not have the chance to explain to the officers why they had left their previous employer, which in most cases was because they had been abused,” Drolet added.

Filipina Canadian Mable Elmore, a Member of the Legislative Assembly (MLA) in B.C. and staunch advocate for caregiver rights, has called for scrapping Project Guardian, stating that it further marginalizes nannies.

“We should not be targeting our caregivers,” she said. Elmore’s mother is a Filipina nurse who came to Canada in 1965 who was granted permanent status upon arrival. “Since then, Canada’s immigration shifted,” she said.

Elmore asked IRCC Minister John McCallum about Project Guardian during the Greater Vancouver Board of Trade event in March, but the latter admitted he has no knowledge of the initiative.

Border services officers “use their discretion in balancing enforcement action, in the cases where there is a clear violation, with issuing warning letters to facilitate clients regularizing (caregives’) status in Canada,” spokesman Barcham said.

Barcham cited the case of a caregiver who arrived in Canada and found out that her authorized employer had already canceled her contract; she then began working in violation of the conditions of her work permit for another employer. “This client was not deported, rather was issued a warning letter and was given time to regularize her status in Canada,” Barcham said.

Another case involved a caregiver who knowingly began working for other employers and violated conditions of her work permit. The caregiver was meted an exclusion order and removed from Canada.

But WCDWA’s Drolet is questioning if CBSA’s resources are best used in investigating caregivers who are among B.C.’s most vulnerable workers. 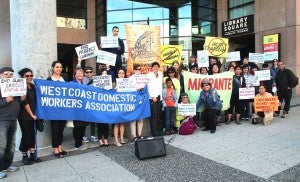 Drolet noted that caregivers have the right to restore their status in Canada as a worker if they have performed work outside of the confines of their work permit.

“The heavy-handed approach used by CBSA curtails this right. Caregivers should be issued open work permits or sector-wide permits instead of tied work permits, which would reduce their vulnerability to exploitation,” she added.

The Philippine Consulate in Vancouver has advised Filipino caregivers to consult with the post’s labor office, or with immigration lawyers or advocacy groups before considering taking on under-the-table jobs.

Consul General Neil Frank Ferrer in an email to INQUIRER.net confirmed that the Philippine post is aware of the issues involving Project Guardian but only through media and public statements by cause-oriented groups. No particular case has been brought to its attention by Filipino caregivers.

“Our Consulate is aware of the issues and apprehensions of some of the caregiver groups concerning Project Guardian, although neither the Consulate nor the Philippine Overseas Labour Office (POLO) in Vancouver has been directly consulted about it or requested to render assistance,” he said.

Ferrer said he has directed POLO to look into the CBSA project, particularly into allegations that Filipino caregivers are being unfairly targeted.

“Concerned Filipino caregivers, as far as practicable, (should) follow their employment contracts to the letter and strictly obey Canadian law and the conditions of their stay and employment in Canada,” Ferrer said.

Those who face maltreatment and abuses, Ferrer said, must report violations of their rights to authorities instead of taking matters into their own hands, which could only complicate their problems.