Picking sides: A world of opinions on South China Sea 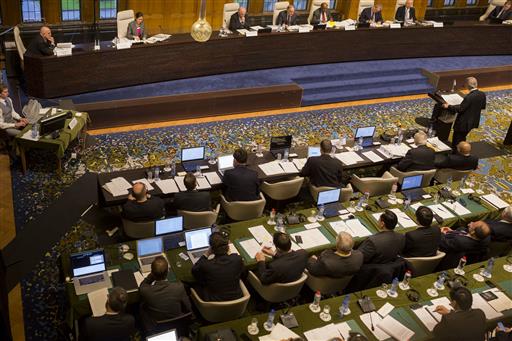 WASHINGTON  — A case brought by U.S. ally the Philippines against China represents a diplomatic dilemma for far-flung nations. Ahead of a ruling Tuesday, Washington and Beijing have rallied support for their respective positions on the use of international arbitration in South China Sea disputes.

The United States has been building diplomatic pressure in the West and in Asia on China to abide by the decision by a tribunal in The Hague, Netherlands. China, which maintains it won’t be bound by the ruling, has been pushing back by building support from nations mostly in Africa and the Mideast.

The U.S. is not a party to the South China Sea territorial disputes, nor to the U.N. Convention on the Law of the Sea, under which the tribunal has been formed, but says it wants China to play by international rules. Since there is no enforcement mechanism for the ruling, any impact will depend on how the international community reacts.

READ: China Daily Opinion: Political motives behind US operations
Here’s a look at where dozens of countries stand:

ASEAN has been trying for years to achieve diplomatic solutions in the South China Sea, making little progress and exposing divisions in the 10-member bloc, which includes the Philippines. It is unlikely to reach consensus on the Permanent Court of Arbitration ruling.

When President Barack Obama met ASEAN leaders in February they agreed on “full respect for legal and diplomatic processes” in accordance with the U.N. convention. But Cambodian Prime Minister Hun Sen said in late June he opposes any ASEAN declaration to support the tribunal’s decision and efforts by countries outside the region “to mobilize forces against China.”

Vietnam, which has fought China over competing South China Sea claims, has been most supportive of the Philippines’ case and submitted a statement to the tribunal. Hanoi has said it supports “full compliance” to the procedures of the convention.

But other ASEAN nations are generally wary of speaking out for fear of alienating China, the region’s economic heavyweight. Malaysia and Brunei have said little about the case, though they too are South China Sea claimants.

Indonesia and Singapore are not claimants but have been a bit more outspoken. Singapore’s Foreign Minister Vivian Balakrishnan said last month that the ruling could have implications beyond the South China Sea and “we cannot subscribe to the principle that might is right.” Indonesian President Joko Widodo has underscored his commitment to protect Indonesian sovereignty over its Natuna Islands at the edge of the South China Sea, where he flew last month after the Indonesian navy detained a Chinese fishing boat and arrested a group of Chinese fishermen. His Foreign Ministry has declined to say whether the ruling should be binding on both sides but says international law must be respected.

In another indication of ASEAN discord, its 10 foreign ministers agreed on a tough statement of concern on the South China Sea issue after meeting their counterpart in China. The statement was not issued publicly, however, after one or more had a change of heart while in China and withdrew approval of the communique.

Even the Philippines’ position is unpredictable as a new government has just taken office. President-elect Rodrigo Duterte has expressed willingness to restart bilateral negotiations with China.

Moscow, which shares China’s suspicion of Washington, is Beijing’s most prominent supporter on the issue although it has not explicitly said how it will respond to the tribunal’s ruling. On a visit to China in April, Russian Foreign Minister Sergey Lavrov said Russia is against any interference from outside parties in the South China Sea — a reference to the U.S. — “or any attempts to internationalize these disputes.” Like China, Russia says disputes should be resolved through talks between the parties directly involved.

China’s state media has reported that about 60 countries have expressed support for China’s stance on the arbitration case. The Foreign Ministry has in recent weeks given prominent mention to support it claims to have from nations principally in Africa, the Mideast and Central Asia.

But relatively few of those foreign governments have issued statements independently. Some, including Fiji and NATO member Slovenia, have disavowed China’s description of their position.

The Center for Strategic and International Studies in Washington said it could confirm official statements from Afghanistan, Gambia, Kenya, Lesotho, Niger, Sudan, Togo and Vanuatu.

The EU has urged all South China Sea claimants to resolve disputes through peaceful means and “pursue them in accordance with international law,” including the U.N. convention. The Group of Seven wealthy nations, which comprises Britain, Canada, France, Germany, Italy, Japan, the U.S. and the EU, has called on all states to fully implement decisions binding on them in courts and tribunals provided under the convention.

In June, French Defense Minister Jean-Yves Le Drian proposed that European navies coordinate patrols in Asian waters to reinforce a rules-based maritime order. He warned that if the laws of the sea are not respected in that region, they could also be challenged in the Arctic Ocean or Mediterranean Sea.

In January, Foreign Minister Julie Bishop said the China-Philippines ruling will be “extremely important” as a statement of international principle and will “settle once and for all” whether artificial reefs are entitled to territorial waters.

China has built up several artificial islands to advance its sweeping territorial claims in the South China Sea.

Australia has been less outspoken in support of arbitration than the U.S., perhaps mindful of Australia’s own resistance to arbitration to resolve its disputed maritime border with tiny East Timor.

India has not issued a categorical position on the arbitration case, but has been broadly supportive of the application of international law. India shares U.S. concerns about Beijing’s rising ambitions in the seas of Asia.

India’s External Affairs Ministry says that “all countries must abide by international law and norms on maritime issues.” India set an example in 2014 when it accepted a decision by the Permanent Court of Arbitration that ruled in favor of Bangladesh in a dispute over the countries’ maritime boundary.

Japan was an early supporter of the Philippines’ pursuit of arbitration and says both China and the Philippines should abide by the outcome. Japan sees that as upholding international law, but it also reflects concern that historic rival China seeks strategic control of vital sea lanes in the South China Sea that carry 80 percent of Japan’s crude oil imports.

Japan’s support of third-party dispute resolution is not universal. While it has sought to take its dispute with South Korea over the South Korean-held Dokdo or Takeshima islands to the International Court of Justice, it says no such action is needed in its dispute with China over the Senkaku or Diaoyu islands, which are administered by Japan.

Like Japan, South Korea is heavily dependent on fuel imports that pass through the South China Sea, but it has closer ties with China and has been less inclined to speak out. The Foreign Ministry says South China Sea disputes should be resolved under internationally established regulations and that it is “looking with interest” at the Philippine-China arbitration case.

Taiwan has complained that the tribunal has not solicited its views. While Taipei officially exercises the same nine-dash line claim as Beijing in the South China Sea, it is primarily concerned about Taiping island in the Spratlys. Taiwan administers that remote land feature and is concerned it could be designated as a rock without the rights granted to islands.