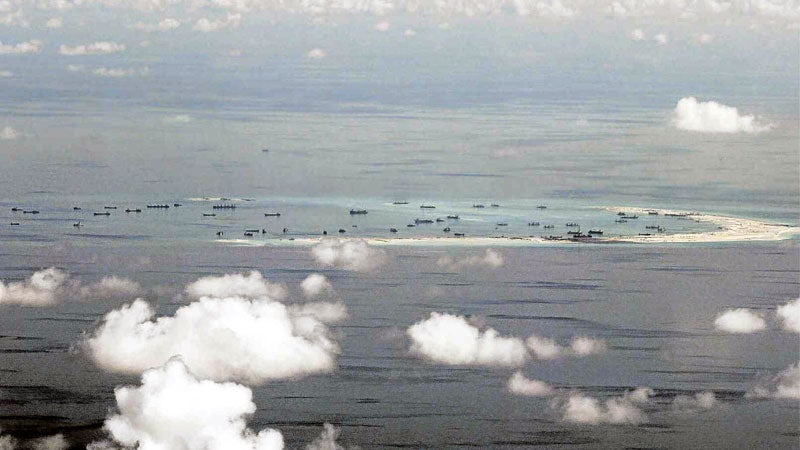 COURT RULING COUNTDOWN This photo, taken on May 11, 2015, shows land reclamation on Panganiban Reef in the Spratly Islands in the South China Sea. A landmark ruling on Tuesday on the arbitration case brought by the Philippines that seeks to strike down China’s claim to almost all of the South China Sea will be a test for international law and world powers. AP

CONFIDENT that the Philippines would get a favorable ruling from an international tribunal on its dispute with China over the South China Sea, Sen. Leila de Lima on Sunday said she hoped the Duterte administration would study the decision carefully before deciding what action to take so that Manila’s 20-year effort to resolve the conflict would not go to waste.

The United Nations Permanent Court of Arbitration in The Hague will hand down a ruling at 11 a.m. (5 p.m. in Manila) tomorrow in the increasingly bitter dispute between the Philippines and China, in a closely watched case that risks ratcheting up tensions in Southeast Asia.

Most legal experts expect the ruling to go in favor of the Philippines, but the Duterte administration is not aflutter about that prospect.

It is up to Solicitor General Jose Calida to decide what the government should do if the ruling comes out in favor of the Philippines, Malacañang said on Sunday.

President Duterte said last week his administration was willing to talk with China about sharing natural resources in the West Philippine Sea—South China Sea waters within the Philippines’ 360-kilometer exclusive economic zone (EEZ)—if the arbitral tribunal found for the Philippines.

Invoking the UN  Convention on the Law of the Sea (Unclos), Manila lodged the suit against Beijing in January 2013, saying after 17 years of negotiations it had exhausted all other political and diplomatic avenues.

Angered by the Philippine move, China refused to participate, saying it would not comply with the ruling by a tribunal with “no jurisdiction” over the dispute.

The Philippines asked the court to void China’s claims to almost all of the South China Sea, including waters within Manila’s EEZ and those close to the shores of other claimants in the strategic waterway—Brunei, Malaysia, Vietnam and Taiwan.

Manila also demanded respect for its right to fish and explore resources within its EEZ.

The case does not involve questions of sovereignty, an issue handled only by the International Court of Justice.

Speaking in a radio interview, De Lima said she was confident the Philippines would get a favorable decision from the court.

“We have international law as support for our position and recognition of the rule of international law, which was pointed out by the previous administration,” said De Lima, who served as justice secretary to then President Benigno Aquino III and who supervised the Office of the Solicitor General, which represented the Philippines in the case against China.

Aware of Mr. Duterte’s openness to bilateral talks with China, De Lima said the administration should first wait for the ruling to come down then study it well “before determining its next actions.”

“The ruling will be put to waste if we just surrender what is supposed to be ours,” she said, adding that joint exploration means both the Philippines and China have the same rights to resources in the West Philippine Sea.

The President and Chinese Ambassador to the Philippines Zhou Jinhua met last week in Malacañang and discussed joint exploration.

Malacañang reiterated on Sunday that it would wait for the ruling before making any move toward talks with China.

“Once we have the decision, what we will do is to study [it]. Then that’s the time that we shall explore our next move,” Presidential Communications Secretary Martin Andanar told public broadcaster dzRB.

Andanar said the government would take all matters pertaining to the dispute with China “legally.”

Legal experts agree that after three years of deliberations, two hearings and nearly 4,000 pages of evidence, the arbitral court is likely to find in Manila’s favor—in a decision with far-reaching ramifications.

“An award from the tribunal that rejects some of China’s more dubious claims would provide support for the mainstream views of other states in the region,” Cecily Rose, assistant law professor of public international law at Leiden University, told Agence France-Presse (AFP).

“China is bound to comply with the award. But should it refuse to do so, the tribunal has no enforcement mechanism to which it can turn,” Rose said.

The ruling comes against a backdrop of frequent military brushes between China and its rival claimants, whose EEZs ring the waters believed to hold untapped oil and gas reserves.

The tensions have also drawn in the United States, which has defense treaties with the Philippines and other regional allies.

In a show of strength last week,  the US Navy sent warships to patrol close to some of the artificial islands that China built in the Spratly archipelago to bolster its claims to nearly all of the 3.5-million-square-kilometer South China Sea.

READ: US strike group patrolling in South China Sea visits PH
The US destroyers Stethem, Spruance and Momsen have been patrolling near Panatag Shoal (Scarborough Shoal), a rich fishing ground in the West Philippine Sea near the coast of Zambales province, which China seized in 2012 after a two-month standoff, forcing Manila to bring the law of the sea case against Beijing early the following year.

Manila and Washington have also concluded an Enhanced Defense Cooperation Agreement (Edca) that allows greater access by US troops to Philippine military bases, including one near Philippine islands in the Spratlys that China insists are parts of its territory, and to store weapons and equipment in those bases.

Washington on Friday urged the Philippines and China “to comply with the ruling” and appealed to “all claimants to avoid provocative actions or statements.”

“Whatever the outcome, the case will not contribute to improved relations between China and other claimants in the South China Sea,” Frans-Paul van der Putten, a senior researcher at the Clingendael think tank, told AFP.

China’s state-run media on Friday said that Beijing would not take “a single step back” if the United States and the Philippines “act on impulse and carry out flagrant provocation.”

Facing international pressure to comply with the arbitral court’s ruling, China, according to the state-run Global Times, will “fight back.”

China, the paper said, could turn Panatag Shoal “into a military outpost” and “tow away or sink” the BRP Sierra Madre, an old and rusting hospital ship that Manila grounded on Ayungin Shoal (Second Thomas Shoal) in 1999 to mark Philippine territory in the Spratlys, to “resolve the standoff once and for all.”

Beijing insists it has “undisputed sovereignty” over almost all of the South China Sea, basing its arguments on Chinese maps dating back to the 1940s marked with a nine-dash line that encompasses waters within the EEZs of the other claimants.

Expert Joris Larik from The Hague Institute for Global Justice said “China’s position and credibility will be weakened if the arbitral panel finds against it.”

But Chinese President Xi Jinping said China was “not afraid of trouble” and state-run newspaper People’s Daily urged Beijing to prepare for a “military confrontation” in the South China Sea.

China launched military drills in the South China Sea on Friday, with its Navy carrying out combat exercises with live missiles, according to the PLA Daily, the Chinese military’s official newspaper. With a report from AFP