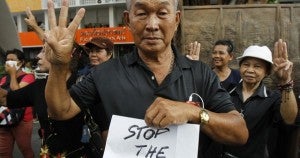 PORTSMOUTH, New Hampshire – “In this war, drug dealers must die!”

Sounds familiar? If you think it’s Philippine President Rodrigo Duterte delivering one of his trademark battle cries against drugs, you’re mistaken. It’s a statement made by Thai Prime Minister Thaksin Shinawatra, who in early 2003 was urged by the King of Thailand to suppress the drug menace.

Prime Minister Thaksin’s all-out war on drugs policy was implemented by Interior Minister Wan Muhamad Nor Matha, who mirrored Thaksin’s blood-thirsty belligerence and was equally clear about the marching order: “In our war on drugs, the district chiefs are the knights, and provincial governors are the commanders. If the knights see the enemies, but do not shoot them, they can be beheaded by their commanders.”

So how did Thailand’s violent, extrajudicial approach to the drug problem play out?

According to an investigative committee created by the military junta that ousted Thaksin in 2006, up to 2,800 people were killed the first three months of the campaign. That’s about 30 killings a day.

The Economist reported that the committee found that “over half of those killed had no links to the drugs trade. The panel blamed the violence on a government ‘shoot-to-kill’ policy based on flawed blacklists.”

While that didn’t please human rights advocates, the anti-drug campaign’s impact on street-level drug dealing and use was significant, especially after Thaksin gave himself an eight-month extension to complete the dragnet. By the end of 2003, according the U.S. State Department’s International Narcotics Control Strategy Report (INCSR), 73,231 people were arrested, over 23 million drug pills were seized, and 320,000 drug users surrendered to undergo treatment. With the price of yaa baa (the drug of choice among most Thai users) doubling, availability and consumption declined significantly.

GlobalSecurity.org considered Thailand’s 2003 war on drugs a “relatively successful campaign in a long war, (but) not as a victorious end to the war itself.” Many local, street-level drug dealers were killed but most major Thai drug lords were spared, and the campaign did not exactly reduce cross-border trafficking.

Even Thailand’s King doused cold water on Thaksin’s ebullient claim of outright victory, saying that the fight against drugs was far from over. The King also asked the prime minister to investigate all the drug-related deaths for human rights violations.

By March of 2005, while 74 percent of the Thais polled still supported Thaksin’s campaign, some 68 percent did not think it would be successful. According to the INCSR, “One potential side effect of this 2003 campaign has been changes in use patterns of Thai abusers. Late in 2004 (as the cost yaa baa became prohibitive), there were reports of an increasing popularity in the use of crystallized methamphetamine known as ‘Ice.’”

Thailand’s National Human Rights Commission identified one major problem area in the government’s anti-drug war. The biggest issue that had fatal consequences even for the innocent was the drawing up of “blacklists.” Some local officials used it to settle old scores. As one commissioner said:

“Most names are drawn from the results of community meetings, which offered an opportunity for officials with conflicts to enter the names of people unrelated to the drug trade. Relatives and friends of those accused are also lumped into the same category. And ethnic minorities were subjected to stereotyped beliefs that they were also involved in the drug trade.”

The fact that local officials were given a quota of people to report, plus incentives if they exceeded the quota, further undermined the integrity of the blacklists.

While Thaksin should probably get credit for helping curtail opium production in Thailand (in 2002 to 2003, 90 percent of opium in an estimated 320 hectares was destroyed before it could be harvested), drug consumption, especially of methamphetamine, ultimately returned to alarming levels.

General Paiboon Khumchaya, a senior member of the current Thai junta, expressed his hopelessness in a meeting to discuss the findings of this year’s U.N. General Assembly Special Session on Drugs, as quoted by the Bangkok Post: “The world has now surrendered to drugs, and has to come to think of how to live with drugs.” He went as far as proposing that methamphetamine be taken off Thailand’s list of dangerous narcotics.

According to INCSR, Thailand’s Office of Narcotics Control Board seized up to 1,140 kilos of crystal methamphetamine and 9,750 kilos of methamphetamine tablets in 2015. The UN Office on Drugs and Crime data also shows an alarming growth in the number of meth labs in Thailand: from 2 between 2008 and 2010, to 193 between 2011 and 2012.