SAN DIEGO, California – Mira Mesa has the largest population of Filipinos in the county, and it also holds an emerging gem – The Filipino School.

Established last year, Filipinos in San Diego can be proud of this modern hub that is also a school of traditional values. The School teaches Filipino 100 – a beginner course catered to groups of elementary, middle school, high school, college and adult students.

“The biggest reason why we started the school is that there’s an amazing, beautiful thing about who we are as the Filipino people that we never knew,” said co-founder Tony Olaes.

“How can we spread something that’s so amazingly beautiful if we don’t know anything about it? Our (public) schools don’t teach it, some of our parents don’t even talk about it. All they talk about is the struggle and that it’s hard over there (in the Philippines),” Olaes explained.

Born and raised in San Diego, Olaes said the foundation of the school was to build a community that worked together, but they needed to understand their connectivity with one another.

“(There was a disconnect) between first generation and next generations – those who were raised over there and those raised over here and they could not speak the same language,” he said. “So you have this generation gap and then you also have this cultural gap – we grew up here, they grew up there and it was just a huge, huge gap – a huge ocean dividing us. So how do we bridge that? The only way is through education.” 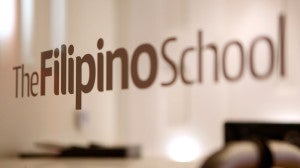 However, despite Olaes’ laudable efforts and growing success in pioneering Pinoy unity, he can never forget how Filipinos were described in the American media as kidnappers. Finding his roots and realizing the need for a hub to unite the diaspora has been a long journey, shadowed by misunderstanding and the lack of a nationalistic connection.

Now, aside from business trips, Olaes always goes to the Philippines for Filgrimage – a semi-annual group trip for Fil-Ams 18+ aimed at educating and rediscovering the motherland. It is a project of The Filipino School in partnership with the Department of Tourism, Tourism Promotions Board and Philippine Airlines.

The Filipino School has been the go-to location for events in the Fil-Am community – from welcoming Philippine officials and civic leaders to bamboo sticks being pounded on its floors for tinikling presentations.

“I’m gonna say that the community loves it and the people that take the class love it,” he said. “But it’s not just the school, it is there to bring a community together, a proud community together and realize that we’ve arrived.”

Its doors are clear – welcoming and inviting. On the entrance wall are big, bold letters spelling “Bayanihan,” the spirit of the Filipino in unity and helping one another.

“We’re not here to be second class, we’re here to be first class because we’ve always been,” added Olaes. “It’s time to demonstrate it not only through the structures that we built, but what we hold precious inside of us. That great divide, this school is there to bridge that. We start to demonstrate that first class. That as a first class people, we operate under one spirit.”

Its modern facilities and colorful, history-depicting walls are educational on their own. A former office, the school’s founders had its tight walls broken down for a more open space. In its main room is a big, awkwardly placed pole connected to the building. Olaes designed it into a tree with its branches depicting the Filipino diaspora and its body connected to an abstract, wooden depiction of the Philippine map.

“Our school is gonna fill that gap,” said Olaes. “When it fills that gap, we will be strong and we will be able to not only help our communities but also help the Motherland where every single Filipino on the planet came from. That’s the whole context of why we built this school. How’s that for a bakit?”

The Filipino School is located at 9845 Erma Road Suite 200, San Diego 92131. More information can be found on thefilipinoschool.com and filgrimage.com.