Duterte says Abus not criminals, blames US for Mideast violence 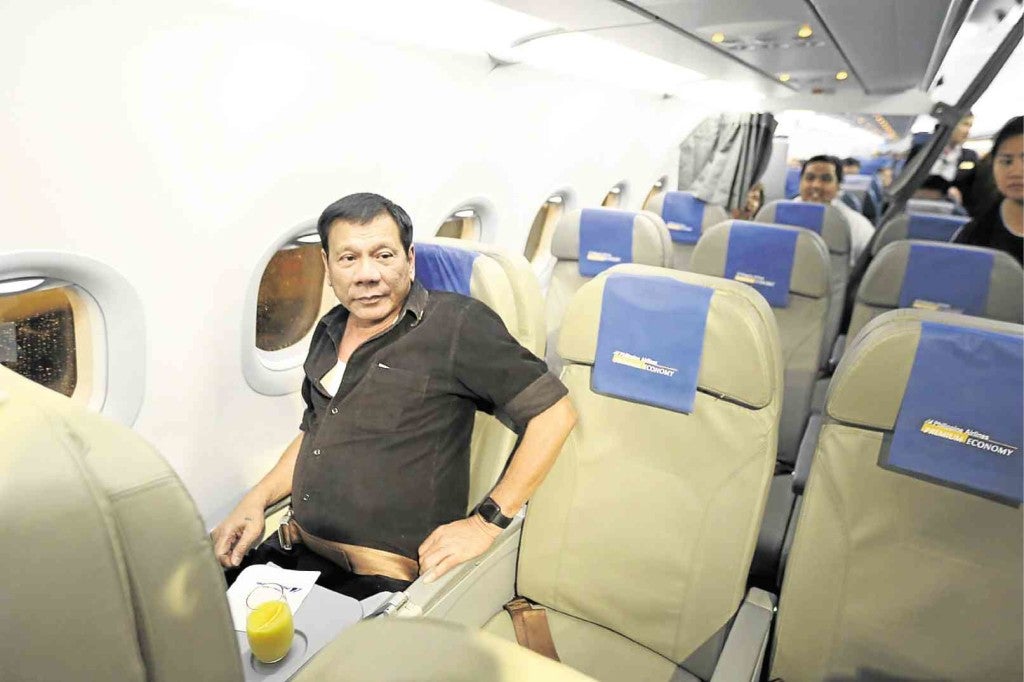 NOT AIR FORCE ONE President Duterte flies economy on board a Philippine Airlines plane on his way home to Davao on Thursday. PRESIDENTIAL PHOTOGRAPHERS’ DIVISION

DAVAO CITY, Philippines—President Rodrigo Duterte on Friday balked at calling the Abu Sayyaf criminals, even as he blamed US intervention for the bloody conflicts in Iraq and other Middle Eastern countries.

“That’s why I am not including Abu Sayyaf [activities] in criminality. You’ve never heard me say (they are) criminal(s). It is a different setup there because these are the guys who were driven to desperation,” he said in a speech during the Hari Raya Eid al-Fitr celebration at SMX convention center here.

Duterte said he knew the situation “from Nur [Misurari] to the ARMM (Autonomous Region in Muslim Mindanao).”

“There is no sufficient semblance of governance and that is why they are pushed to the wall,” he said, adding: “Then they became radicalized.”

The President earlier warned the Abu Sayyaf to stop a wave of ransom kidnappings, and said he would eventually confront the militants.

Two Canadians were successively beheaded by the militants in Sulu after ransom deadlines lapsed.

The United States and the Philippines have blacklisted the Abu Sayyaf as a terrorist organization for bombings, kidnappings for ransom and beheadings.

In his speech, Mr. Duterte also suggested that US policy was to blame for terrorist attacks on its soil, saying, “It is not that the Middle East is exporting terrorism to America, America imported terrorism.”

He said the US-led invasion in Iraq, which was backed by Britain, led to Saddam Hussein’s downfall but caused the oil-rich nation to descend into bloody strife, adding that America’s action had no legal basis.

Mr. Duterte earlier said he would chart a foreign policy not dependent on the United States.

Mr. Duterte said that before the US-led coalition invaded Iraq, Saddam Hussein was in control and the situation there was much better than today.

The President also said violence worsened in Libya when Moammar Ghadafi was ousted as president. He said foreign intervention continued to worsen the Middle East situation, citing Syria’s case as another example.

He said the situation that gave rise to radicalism there was different, though the people there were against foreign intervention.

In the Philippines, he said the players were all Filipinos and “we are all brothers.”

He said he thought of federalism as the effective way to resolve the Mindanao problem because it would give everyone the same opportunity.

Read Next
Gains from Thailand’s bloody war on drugs proved fleeting
EDITORS' PICK
Would the military allow me to stay this long if I’m inutile? – Duterte
65% of Filipinos say Duterte’s health should be made public – SWS
Pre-order the new vivo Y20s [G] to get a free TWS earphone
In good spirits: SMDC helps farmers and residents through Kadiwa Market
Smart three-peats as country’s fastest mobile network – Ookla
DSWD chief admits ‘slow start’ in distribution of aid in ‘NCR Plus’
MOST READ
Vico Sotto frets getting photos of ‘butt vaccination’ from Pasig dwellers
Metro Manila to have shortened curfew hours from 8 p.m. to 5 a.m. under MECQ
San Miguel Corp. continues to invest heavily in the Philippines’ future
COVID-hit Roque slams ‘un-Christian’ query on how fast he secured hospital bed
Don't miss out on the latest news and information.