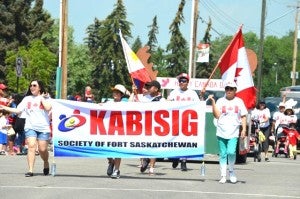 Members of Kabisig Society of Fort Saskatchewan during the Canada Day parade. CONTRIBUTED

RED DEER, Alberta – Across Canada, Filipino Canadians and immigrants joined celebrations of Canada Day, July 1, with barbecues, parade contingents and, in this city, even a “jeepney.”

The maple leaf country celebrated the 149th year of the enactment of Constitution Act in 1867 marking Canada as a “new dominion” with four original provinces within the British Empire.

Once again the tasty, sweet-and-spicy flavor of the Filipino pork barbecue was a hit during the Canada Day celebration in Red Deer, some 154 kms south of Edmonton City, the Alberta capital.

The Philippine Canadian Association of Red Deer and District (PCARDD) ordered more than 600 kilos of pork from Olymel, a meat plant in Red Deer known to hire temporary foreign workers from the Philippines. 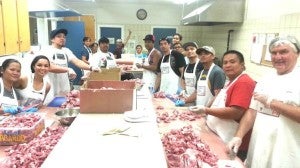 Janice Kong, second to the left, leads members and volunteers of PCARDD in preparing pork barbecues for Canada Day. CONTRIBUTED

Some 20 PCARDD volunteers chopped, marinated, skewered and froze some 4,000 barbecue sticks of the meat every Sunday starting at the end of May in time for the Canada Day celebration.

The yearly event is a crowd-drawer and big fundraiser for PCARDD. The barbecues were sold together with 1,300 banana fritters, 1,200 spring rolls, adobo, rice and pancit.

The barbecues were sold at C$4 a stick this year, up from $2.50 in previous years because of the increasing cost of meat products, said Janice Kong-Schmidt, PCARDD president.

Kong-Schmidt said the event pulls in $6,000 to $8,000 average annual profit for the organization. But showcasing traditional Filipino foods is only part of a bigger goal, she added.

“It makes Canadians and other nationals aware of our culture,” said Kong-Schmidt. By seeing volunteers work, it also shows how hardworking Filipinos live the spirit of bayanihan by working together.

PCARDD members and volunteers stayed late at night until the fireworks display serving food because there were still people lining up to buy, Kong-Schmidt added.

Meanwhile, the uniquely Filipino “jeepney” plied the roads of Fort Saskatchewan, with a Canadian twist. 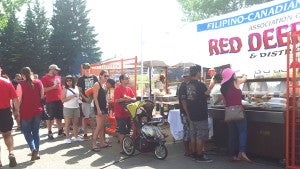 Courtesy of the Kabisig Society of Fort Saskatchewan, the jeepney, which was made up of cardboards mounted on a vehicle, bore the colors of Canada and the Philippines.

Instead of Metro Manila routes, the group marked on the side of the jeepney various places in Edmonton City and Fort Saskatchewan, said Truscott.

Then Philippine jeepney display met cheers from the crowd during the parade. “The vibe is definitely lively and cheerful among Filipinos, proud to show who we are, and welcoming among parade viewers. We received lots of thumbs up and claps from viewers, which is encouraging,” Truscott said. 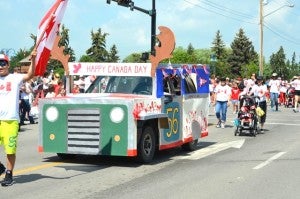 The Philippine “jeepney” rolls down the streets of Fort Saskatchewan on Canada Day. CONTRIBUTED

Fort Saskatchewan City with some 1,000 Filipinos has a small-town feel. “Kabisig does its best to be very visible by joining parades, creating projects open to the public, and volunteering at other events in the Fort,” Truscott said.

To be part of Canada Day celebration is a rite of passage for new immigrants, providing a sense of belonging in their new home, she explained.

“Kabisig Society definitely ensures a welcoming attitude as part of our mandate because we know what it feels like,” she said.

Meanwhile, Camping activities become heaviest in June and peak in July through August during the summer season across Canada. Jeoffrey Mendoza, 34, took his family camping for two nights to join the Canada Day celebration in Banff National Park. 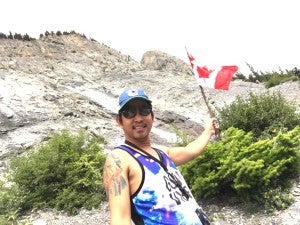 Jeoffrey Mendoza appears to be holding the Canadian flag on top of a hill in Banff, Alberta, where he took his family camping for Canada Day. CONTRIBUTED

The group started the day by walking up a hill, Mendoza said. Seeing a waterfall on top of the hill, the group reached the spot where a Canadian flag stood. “Reaching that spot and having a picture with the flag made me realize how much I love this country that now I would like to call home,” Mendoza said. 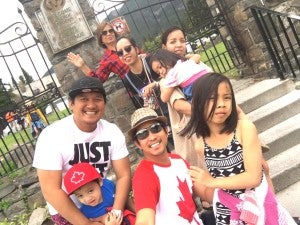 The Mendoza family and friends out camping on Canada Day. CONTRIBUTED

The father of three, who has been living in Canada since 2008, said he hardly remembers his first Canada Day experience. “I was working some 16 hours on that day and during my night shift after fireworks display in downtown we got really busy and I stayed for two more hours,” Mendoza said.

Now, he said that Canada Day is a time ofjoy for families and a way for Filipinos to show how proud they are to be part of the country.