Filipina WWII US Silver Star recipient to rest at Libingan 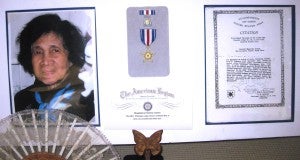 Photo of Cpl. Magdalena Leones, the Silver Star and citation are among the memorabilia of her heroism. CONTRIBUTED

SAN FRANCISCO — Corporal Magdalena Leones, who passed away last month at age 95, will be buried at the Libingan ng mga Bayani in the Philippines with full military honors, as her family had wished.

Leones was the only Filipina recipient of United States Army Silver Star medal, the third highest honor for valor accorded the members of the U.S. Armed Forces. 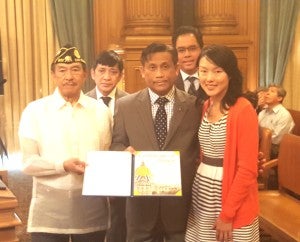 “PVAO (Philippine Veterans Affairs Office) approved the burial at the Libingan ng mga Bayani, and they only need the death certificate to be sent them,” Asercion disclosed. “On top of that, Philippine Air Lines agreed to shoulder 50 percent of the cost of bringing her remains to the Philippines, which is usually $2,000.”

The “Citation to Accompany the Award of the Silver Star” signed on October 22,1945 by Lt. General C.W. Griswold of the United States Army stated that Leones was being awarded the Silver Star “For gallantry in action at Luzon, Philippine Islands, from 27 February to 26 September 1944. During the period, Corporal Leones repeatedly risked her life to carry important intelligence data, vita radio parts and medical supplies through heavily garrisoned enemy-held territory. Although she knew that detection by the enemy would result in torture and execution.”

A week before Asercion’s news, the San Francisco Board of Supervisors honored Leones with its Certificate of Honor, which was crafted by District 6 Supervisor Jane Kim. She handed the certificate to Philippine Consul-General to San Francisco Henry Bensurto Jr.

Bensurto thanked the supervisors on behalf of the Leones family, the Filipino community and Filipino World War II veterans. He was accompanied by Deputy Consul-General Jaime Ascalon and Consul Reginald Bernabe.

Kim stated in her commendation speech: “Before she turned 25, Magdalena had been arrested by Japanese soldiers three times and escaped all three times. On July 18, 1945, Col. (Russell) Volckmann (the USAFIP, NL commander), the man who offered her the position of a special agent, recommended that Magdalena be awarded the U.S. Silver Star. Later in her life, she was also awarded the Philippine Liberation Medal, the Resistance Movement Medal, the World War II medal, and the Philippine Independence Ribbon.” 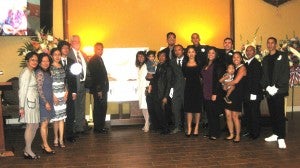 Family members, other loved ones and friends gather beside Magdalena Leones’ casket in a memorial for her in Daly City. CONTRIBUTED

Kim attended Leones’ memorial in Daly City and heard stories about her from her sons, daughter and grandchildren. Among the stories that stood out was that she saved many lives by materially contributing to the early liberation of the Philippines that without her bravery, many more lives would have been lost during the liberation of the country from Japanese occupation.

“She was truly a remarkable woman and stories that I heard are unimaginable, in her courage, intelligence and bravery,” Kim described Leones. “Indeed, we must continue to remember our World War II veterans.”

Leones died on June 16, 2016 at the age of 95. She is survived by sons Guillermo Tabor, Gildon Tabor and Gregorio Tabor; daughter Alijadra Maytas of West Virginia; husband Pedro Tabor of Richmond; and an adopted son, Leonard Yates. She had 13 grandchildren and three great-grandchildren.

Her children said that Leones moved to California from the Philippines in 1969, worked as a clerk at Pacific Bell, owned homes in Richmond and in San Jose and did not talk much about her war exploits. 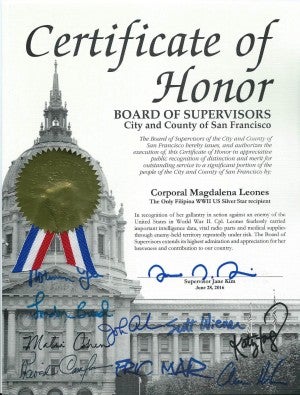 The Certificate of Honor given to Cpl. Magdalena Leones was sponsored by District 6 Supervisor Jane Kim and signed by all members of the San Francisco Board of Supervisors. CONTRIBUTED

Asercion, meanwhile lamented that Leones was not given proper respect and recognition in her death by US military officials during the funeral that he and Kim attended.

“When the commendation was given by the San Francisco Board of Supervisors, I felt elated that at least the City of San Francisco is recognizing her heroism when nobody else would. If she had been recognized by the U.S. military and the U.S. government, there would have been admirals, generals, flag staff and honor guards because she is entered in the history books as the only Asian female awarded the Silver Star for gallantry in action against the enemy of the United States in World War II,” Asercion decried.

“Why is it that this lady who received the Silver Star medal for gallantry in action in defense of America was memorialized without anybody present? It was not an oversight. It is the callousness of the Americans towards the treatment of Filipino World War II veterans. It clearly demonstrate how callously the veterans are treated when the only Asian and Filipina female was memorialized and there was nobody there,” Asercion rued further.

Nevertheless, Asercion admitted that the death of Leones would help to finally force the Americans to recognize the heroism of the Filipinos, especially if it was shown that Americans did not recognize and pay her enough respect.

As an elected member of the Republican Central Committee, Asercion has cited Leones as his clout in appealing for additional Republican congressmen to become co-signatories the the Congressional Gold Medal (CGM) bill for Filipino veterans in World War II. After the death of Leones, nine Republican senators reportedly signed up as co-signatories, believing that in doing so they were also honoring Leones.