OFW in Canada: From nurse to nanny to nursing home worker 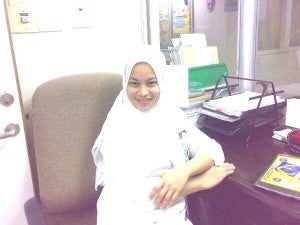 Mercy Tabelisma in Riyadh: “There was no”freedom”; there were many restrictions because of their religious beliefs and regard for women. CONTRIBUTED

SAN FRANCISCO — Two weeks before his term ended, President Benigno S. Aquino vetoed House Bill No. 6411 and Senate Bill No. 2720, which would have raised the salary of the nurses in the Philippines to Php 25,000.

Mercy Ruiz Tabelisma, 37, single, who was a registered nurse in the Philippines but is now working in Canada, had been waiting for that bill to become law because she had been thinking of going back home.

Tabelisma is still on a journey in search of a better life, a journey that has taken her to Riyadh, Saudi Arabia and now Ontario, Canada.

“I think I will stay here and wait to have an immigrant status or citizenship since I have been here for seven years and five months now,” Tabelisma now says. She is a caregiver at Relief Health Care Services Inc., which sends workers to hospitals, nursing homes, retirement homes and long-term care and home care facilities. Tabelisma works in a nursing home in Mississauga, Ontario.

In the Philippines Tabelisma worked for five years at St. Jude Hospital and Medical Center, a private hospital in Manila, after she passed the board exam. She recalls that most of the time the hospital was understaffed, a risky situation for patients as it could lead to negligence and errors

“Sadly, nurses back home are underpaid, whether you are working in a government or private hospital. That’s why nurses choose to leave the country, sacrificing to be away from their love ones,” Tabelisma reasons out. She had to help send her younger siblings to school.

From nurse to nanny

Upon arrival in Canada, Tabelisma found out that the family that sponsored her lived in the countryside where there was no public transportation. She was a nanny to a 10-month-old baby boy.

“After a few months, I resigned. I had a hard time finding a new sponsor. It is a good thing I have relatives in Canada,” she says.

In Canada, a person cannot work aside from what is stated in his/her visa. Since she had a caregiver visa, she had to work illegally. Apart from being a nanny, she also worked in factories that made whistles and clothing lines, in plants that did printing and packaging, in sandwich/burger stands, and cleaned houses and apartments.

After six months she found a sponsor and is now legally working in a nursing home under Relief Health Care Services Inc.

Although Tabelisma is a registered nurse in the Philippines, she cannot practice nursing in Canada unless she studies and takes a board exam again that is recognized by the Canadian government. However, she prefers working in Canada instead of Saudi Arabia because “they have freedom” to do things, from dressing up to going out anywhere. 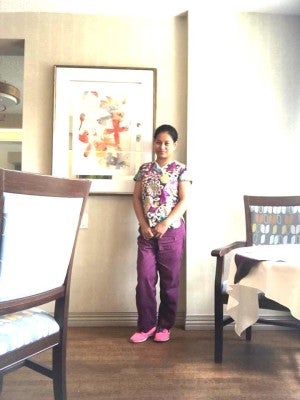 Tabelisma in a nursing home in Canada: “Nurses are the heart of the health care system.” CONTRIBUTED

Canada has diverse people. Canadians are tolerant. There is a law against discrimination, and workers just have to report to the government if they face instances of prejudice. Tabelisma, however, experienced bullying from fellow Filipinos when she first arrived in Canada.

“It is very usual. Just like in the Philippines, if you are new in the place, the old-timers might bully you. But I did not let them do that to me. I fought back. Now, I am okay,” she says.

“In my job now as a care-giver, I mostly handle older clients–clients because I am not a nurse here–with cases like Alzheimers/dementia and needing palliative care. The only time I change my care plan is when a client displays a change in behavior,” Tabelisma explains.

Although, her work in Canada is secure, she has to work overtime because of high taxes. Yet, she is thankful because Canada gives many benefits to immigrant workers and its citizens.

“I feel bad for the nurses back home. With the nurses’ workloads–it’s time to give them a raise. Perhaps, Pnoy would like to experience being a nurse for a day or two,maybe then he would realize how hard it is to be one. You are literally drained, not just physically, but also emotionally, psychologically and spiritually,” Tabelisma says.

Although she is already experiencing a good life in Canada, she still thinks of the nurses in the Philippines because they are the “frontliners” of the health care system. Nurses are the first to attend to the patients, especially the ones working in the ER department; hence they are at greater risk of being exposed to and contaminated with contagious diseases.

“The nurses are the ‘heart’ of the health care system. Just like the human body, if the heart does not work, all the other parts of the body will not function.”