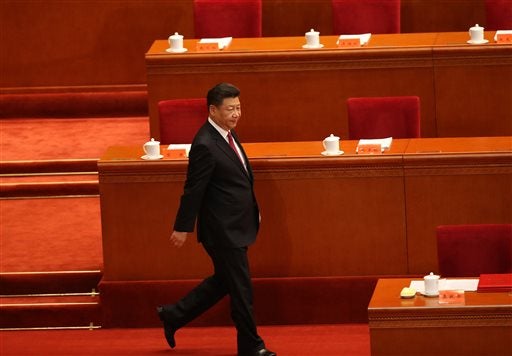 Chinese President Xi Jinping arrives for a ceremony to mark the 95th anniversary of the founding of the Communist Party of China at the Great Hall of the People in Beijing, Friday, July 1, 2016. AP PHOTO

BEIJING—China will never compromise on sovereignty, President Xi Jinping said on Friday ahead of an international tribunal ruling over Beijing’s claim to almost all of the South China Sea, as he marked the Communist Party’s 95th anniversary.

“No foreign country … should expect us to swallow the bitter pill of harm to our national sovereignty, security or development interests,” Xi told an audience of top officials, to rapturous applause.

“We are not afraid of trouble,” he said in Beijing’s cavernous Great Hall of the People, stressing a strong army and a wider role for China on the world stage.

His remarks come as regional tensions rise over Beijing’s claims in the South China Sea, with the United States sending naval patrols close to artificial islands Beijing has built in the disputed waters.

Xi took an apparent stab at the United States, saying: “We will not show up at other people’s front doors to flex our muscles. That does not show strength or scare anyone.”

The United Nations Permanent Court of Arbitration in The Hague said on Wednesday it would announce on July 12 its ruling in a case brought by the Philippines challenging China’s claims in the South China Sea.

A special five-member tribunal established by the court in 2013 will also decide on the size of maritime zones around the rocks and reefs in the Spratly archipelago off the Philippine coast.

It will also rule on whether China has caused environmental damage in constructing an artificial island at Philippine-claimed Panganiban Reef, internationally known as Mischief Reef.

The tribunal is not considering questions of sovereignty, and which country owns what islands, reefs and atolls in the sea will remain unresolved by the decision.

The Philippines has asked the tribunal to void China’s claim to 90 percent of the South China Sea, which covers waters close to the shores of its smaller neighbors in the region, and demanded its right to explore resources in its 370-kilometer exclusive economic zone, waters locally known as West Philippine Sea, be respected.

Beijing insists that the international court has no jurisdiction over the issue and has boycotted the proceedings.

It says it will ignore the court’s ruling.

Paul Reichler, the Philippines chief lawyer in the case, on Wednesday said China risked being seen as an “outlaw state” unless it respected the tribunal’s ruling.

Reichler said he was not privy to the ruling and did not expect to be informed until the last minute.

But he said he was confident that the Philippines would win the legal argument, matching the consensus in Washington and most major foreign capitals.

Reichler said a ruling against Beijing “would deprive China of any legal basis” for its sweeping claims in the South China Sea.

In a statement, China’s Ministry of Foreign Affairs said late Wednesday that it would reject any decision by the tribunal.

“China does not accept any means of third-party dispute settlement or any solution imposed on China,” ministry spokesperson Hong Lei said.

“The Chinese government will continue to abide by international law and basic norms governing international relations as enshrined in the Charter of the United Nations, and will continue to work with states directly concerned to resolve the relevant disputes in the South China Sea through negotiation and consultation on the basis of respecting historical facts and in accordance with international law, so as to maintain peace and stability in the South Sea,” he said.

The new Philippine leadership is considering bilateral talks with China to resolve the dispute, but not before the international tribunal hands down a ruling.

New Foreign Secretary Perfecto Yasay on Friday said the Philippines expected China to take “more aggressive actions” in the South China Sea if the ruling went against it.

He said, however, that the Philippines would still try to move toward “peaceful negotiations” for an effective implementation of the tribunal’s ruling.

At the first Cabinet meeting of the Duterte administration on Thursday, Yasay said the Department of Foreign Affairs would “study the implications and ramifications” of the ruling then recommend a plan of action to the President. Reports from AFP, New York Times News Service and Estrella Torres/TVJ