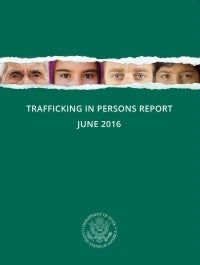 WASHINGTON, DC — An annual human trafficking report by the US State Department has upgraded the Philippines’ anti-trafficking compliance to Tier 1 or full compliance with US standards.

The U.S. State Department’s Trafficking in Persons (TIP) Report of 2016 released June 30 put the Philippines in the top tier of compliant governments.

The Report released yearly by the State Department since 2001 is mandated by the US Congress under Public Law 106-386, titled “Victims of Trafficking and Violence Protection Act (TVPA) 2000.”

The TVPA identifies minimum standards for the elimination of trafficking applicable to the government of a country of origin, transit, or destination for victims of severe forms of trafficking.

Since the issuance of the TIP Report last year, the Philippine government has regularly met the leadership of State Department’s Trafficking in Persons Bureau to highlight initiatives to combat human trafficking. These include expanded training and awareness events for government officials, prospective employees, and the general public, and increased convictions of those complicit in trafficking.

Ambassador to the US Jose L. Cuisia, Jr., who led the advocacy work for the Philippines’ anti-trafficking campaign in the US and who officially steps down today as the country’s top envoy to the United States, welcomed the news.

“The Embassy will continue its engagement with the US State Department to ensure that the Philippines’ efforts to combat this scourge are accurately reported and considered by the State Department,” Cuisia said.

“Our country’s goal is to remain in Tier 1 to ensure to that the estimated 10 million Filipino workers overseas are protected from unscrupulous practices,” Cuisia added.