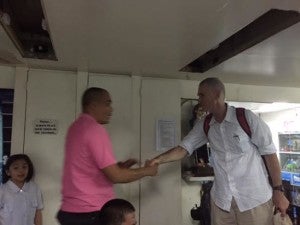 American journalist Timothy A. O’Leary (right) thanks the Manila Police
District cops who tracked and arrested the man who robbed him aboard a taxi days ago. (Photo by Aie Balagtas See, INQUIRER)

MANILA — American journalist Timothy A. O’Leary has been in and out of the country. And in his frequent trips to Manila — including those related to his work for the World Health Organization — he found Filipinos generally kind.

One time, he left a backpack full of gadgets on a bus on the way to the Negros island but the man who got it returned the bag to him.

But on June 16, O’Leary fell victim to a robber who threatened his life in exchange for dollars and P3,000 for rice.

“I want people to know so they can learn from my experience,” O’Leary said in an interview.

The suspect, Biel Bersamino, was slapped with robbery charges on Thursday, at the Manila City prosecutor’s office. He was arrested for robbing another Canadian tourist.

O’Leary crossed paths with Bersamino in Makati Avenue. He was hailing a cab when Bersamino approached him for small talk and told him he’d be seeing his mother in Manila.

Touched by the suspect’s story, and thinking he was a poor security guard who needed a lift to be able to see his mother, the journalist allowed Bersamino to ride with him since he was on his way to Roxas Boulevard to meet a friend.

On their way to Manila, O’Leary said, Bersamino started giving instructions to the driver in Filipino. O’Leary did not ask the driver or Bersamino to explain what they were talking about.

When they reached the Dagonoy Market in San Andres, Bersamino declared a hold-up.

O’Leary said Bersamino asked him P3,000 so he could buy rice. Then, Bersamino threatened to shoot him so he gave P2,000.

Bersamino asked for dollars and threatened to shoot him again, forcing the journalist to give up $100.

Bersamino was arrested last Thursday night near the same market after another foreigner, a Canadian tourist, filed a complaint against him for robbery.

They were also inside a taxi cab when it happened, said case investigator SPO2 James Pozo of Manila Police District general assignment section.

After Bersamino’s description fit what O’Leary reported to MPD-GAS, Pozo called the journalist to positively identify him.

“The cops were phenomenal. They were able to solve this case really fast,” O’Leary said.  SFM