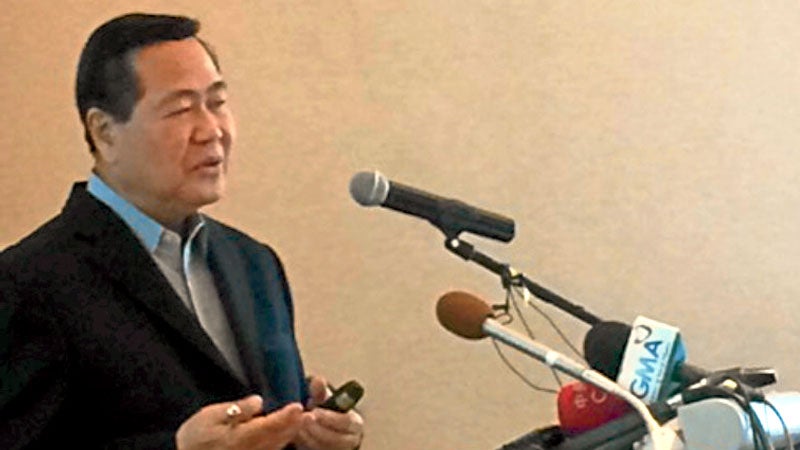 FOCAP GUEST Supreme Court Associate Justice Antonio Carpio speaks during a forum of the Foreign Correspondents Association of the Philippines (Focap) in a hotel in Makati City on Friday. ESTRELLA TORRES

The international panel of the UN Permanent Court of Arbitration in The Hague is expected to hand down its decision on the Philippines’ challenge to China’s so-called nine-dash-line claim on July 7, but parties and observers will be notified seven days before the decision is released, Carpio told a gathering of foreign correspondents in Makati City on Friday.

Officials and analysts inside and outside the region believe the ruling will largely go against Beijing.

China has ignored the proceedings, saying it does not recognize the tribunal’s jurisdiction and will not abide by its ruling.

Beijing claims 90 percent of the 3.5-million-square-kilometer South China Sea, including waters within the 370-km exclusive economic zones (EEZ) of its small neighbors in the region.

That sweeping claim is demarcated on Chinese maps by a line made up of nine dashes that encompass waters within the EEZs of Brunei, Malaysia, the Philippines, Vietnam and Taiwan, which have overlapping claims in the strategic waterway, where $5 trillion in shipborne global trade passes every year and where islets, reefs and atolls are said to be sitting atop vast energy reserves.

To bolster its claim, China has reclaimed land to build artificial islands on several reefs in the Spratly archipelago in the middle of the South China Sea, topping some of them with airstrips that can receive large military planes.

In 2012, China seized Panatag Shoal, a rich fishing ground 230 km off the coast of Zambales province, after a two-month standoff with the Philippine Navy and the Philippine Coast Guard, forcing Manila to bring a law of the sea suit against Beijing in the UN arbitral court the following year.

In its suit invoking the UN Convention on the Law of the Sea (Unclos), the Philippines asked the tribunal to void China’s nine-dash-line claim to the South China Sea and demanded its right to explore resources within its EEZ, locally known as West Philippine Sea, be respected.

Carpio said three possibilities could be expected: A “win-win” ruling in which some of the 15 points raised by the Philippines would be granted and some denied; the voiding of China’s nine-dash-line claim, and a ruling completely ignoring Manila’s petition to nullify Beijing’s sweeping claim.

The third is a remote possibility, Carpio said.

“If they say nine-dash line is valid, we just forget Unclos, nobody will bring any case to the tribunal, and the judges will be jobless,” he said.

A decision favorable to the Philippines, he said, is one that declares China’s nine-dash-line claim “invalid and cannot be a source of maritime claims.”

But China’s stubborn stand not to abide by any ruling requires the Philippines to press its diplomatic campaigns in the Association of Southeast Asian Nations (Asean), United Nations and European Union for pressure on Beijing to comply with the decision, he said.

Carpio said the Philippines’ campaign for support could take two years and may require “influencing” the Chinese mindset.

“It’s in the DNA of the Chinese, because they [have been] taught [from] grade school … that they own [the] waters within the nine-dash line,” he said.

Carpio said he agreed with the plan of President-elect Rodrigo Duterte for bilateral talks with China, but he made it clear that the time for talks should come “after the ruling.”

“We have to do some mending of fences,” she said. “China has questioned why we have gone into arbitration, so we have to do a lot of reaching out.”

Del Rosario said bilateral talks with China should carry the line, “We went to arbitration to save a friendship and not to offend them.”

The United States, a longtime defense treaty ally of the Philippines, has urged China to stop “provocative” moves in the South China Sea and recognize that the tribunal’s ruling is legally binding.

Washington has challenged Beijing’s sweeping claim in the South China Sea by sending warships and surveillance planes over areas near the artificial islands the Chinese have built in the Spratlys.

Last week, the US Navy sent two aircraft carriers, the USS John C. Stennis and the USS Ronald Reagan, on joint exercises in waters off the eastern coast of the Philippines, in a clear message of support for Manila.

The US Embassy in Manila said on Sunday that the USS Frank Cable, one of two forward-deployed submarine tenders, had concluded port visits across the Philippines and would join the US 7th Fleet in monitoring the waters in the  Indo-Asia-Pacific region.

“The USS Frank Cable is on a scheduled deployment in the US 7th Fleet area of operations to conduct maintenance and support deployed US naval force submarines and surface vessels in the Indo-Asia-Pacific region,” the embassy said in a statement.

It said the Frank Cable, carrying more than 500 sailors and civilian mariners, was on deployment to provide vital flexibility to the fleet commanders, extending the range and impact of US naval forces. TVJ

No PH-China talks on sea row in 2 yrs

Drills start on US aircraft carriers

Epidemic and massacre in 1820 Manila