Old is cool for this Fil-Am millennial 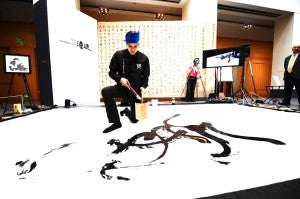 BANGKOK — You might mistake him for an Asian movie star. You’re not way off the mark because Kristian Kabuay is a star in his own right. Kabuay is a self-taught artist influenced by indigenous culture, Asian writing systems and, yes, graffiti, which is very common in his San Francisco Bay Area milieu.

Born in the Philippines with roots in Pangasinan and Manila, Kabuay’s family emigrated to the United States in the 70s to escape martial law. He was just a year old when they left. The family settled in the San Francisco Bay Area.

Unlike many immigrant kids, Kabuay grew up speaking Tagalog at home and even during Filipino public events. He also grew up with a Filipino palate. His love for everything Filipino did not end in eating adobo, doing “mano po” and speaking Tagalog; these only spurred him to explore more of his roots.

“As a child, I liked looking at pictures and read about the festivals in the Philippines. The country is a mix of colorful cultures. It was at my grandparents’ house where I used to read coffee table books about the Philippines,” Kabuay says. 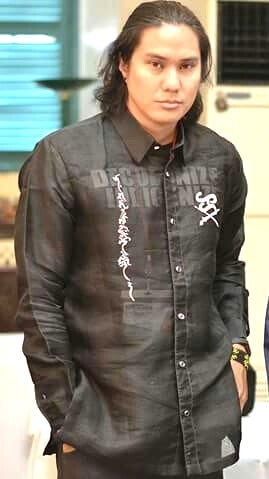 He went back to the Philippines when he was in college. There, he spent his time observing, understanding and researching culture and folkways. His quest for indigenous knowledge led him to the ancient ways of pre-Hispanic Philippines.

After graduating with a business degree at the International Academy of Management and Economics, Kabuay embarked on another career besides being a business analyst in a large company. In 2007 he founded baybayin.com.

Baybayin is always mistaken for alibata. However, scholars pointed out that Baybayin is the correct term for ancient pre-Filipino scripts. This language is nearly extinct but for the efforts of Kabuay and other Filipinos who continue study and promote it.

Kabuay’s approach to promoting Baybayin is not purely theoretical. He blends ancient script with contemporary aesthetics so it will appeal to younger generations. He developed a modern performance style of the writing system called Tulang Kalis (Poetry of Sword), which he introduced as a Filipino Calligraphy series while demonstrating and lecturing at the Asian Art Museum in California in October 2012 and early this year.

He also lectured in schools and institutions such as Stanford University, UC Berkeley, SF State University, UC Davis, Sonoma State, University of the Philippines, National Anthropology Museum of Madrid, and the San Francisco Philippine Consulate. He recently lectured at UCLA in February this year.

Together with other Filipino artists, Kabuay also does street arts and graffiti in Baybayin and joins exhibits featuring his paintings and artworks in various parts of the United States.

Although most of the time, he spends his own money on travels, he also has been sponsored by several organizations and Philippine embassies to do lectures in Japan, United Kingdom, Spain, France and Belgium. 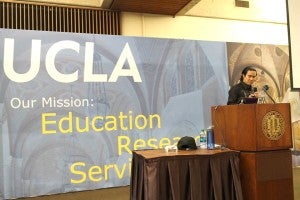 Kabuay during one of his lectures at UCLA. CONTRIBUTED

The Southeast Asian Linguistics Society (SEALS), whose members are from prominent universities like Australian National University, Chulalongkorn University, University of Zurich to name a few, asked Kabuay to be one of the main speakers SEALS annual meeting in Manila last May. He regards his recognition as one the foremost experts in the field of ancient calligraphy both as an honor and a challenge to continue his advocacy.

As an immigrant, Kristian’s thirst for knowledge of his roots was quenched when he studied everything about the pre-Hispanic cultures. Fortunately, there are like-minded older immigrant Filipinos and members of indigenous groups he associates with. Together, they continue to educate young Filipino Americans on their heritage.

Technology also helps in his advocacy. He teaches online on the basics of calligraphy not only to Filipinos, but also to all interested individuals. He designs shirts, caps and accessories with Baybayin script and Filipino quotes, which he sells also online.

“Instead of going to Hawaii, go to the Philippines. You may not know your culture, and one day you may have children and when they start to ask questions, what will you say?” Kabuay posits.