TORONTO, Ontario – Singing duo The Nightingales entertained the Toronto-posted diplomatic corps of various countries and Filipino Canadian community leaders at the Theatre Alliance Francaise June 10 as part of the celebration of the 118th anniversary of Philippine independence.

The Consulate General of the Philippines in Toronto presented Bianca Camille Lopez and Aizel Izza Prietos-Livioco who make up the powerful vocal duo, whose talents were honed at the Philippine High School of the Arts as voice scholars and at the University of the Philippines’ College of Music as scholars in vocal performance.

The pair has had the honor of representing the Philippines at the 5th Nanyang International Festival in Xiamen, China in April 2016. 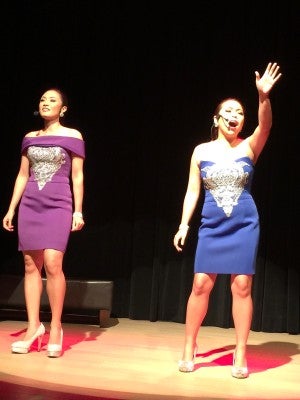 The Nightingales belting out modern songs with a classical twist. MARISA ROQUE

The Nightingales’ two-hour repertoire ranged from operatic arias to Broadway tunes and pop hits to a medley of well-known Filipino folk melodies.

Bianca and Aizel (who prefers to be called Twinkle) are former members of the Philippine Madrigal Singers, one of the Philippines’ foremost choral groups and internationally acclaimed ensembles. 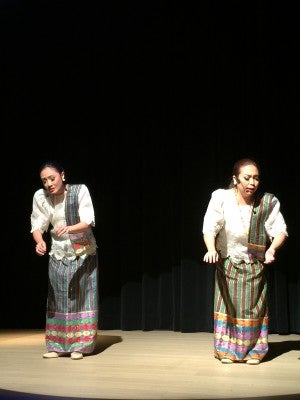 Toward the end of their program, the duo paid tribute to their musical roots by singing selections from works by Filipino composers both classical (Nicanor Abelardo) and modern (Ernani Cuenco and Ryan Cayabyab).

On June 16, they performed at Ottawa’s Sens House, coordinated by the office of Philippine Ambassador to Canada Petronila Garcia. They then performed at the Maranatha Church in Belleville, Ontario on June 18.  Jane Robinson coordinated the Belleville concert. Copies of their self-named CD were available for purchase at these events.

Those interested to know more about The Nightingales may check out their facebook page, www.facebook.com/The-Nightingales-235782853434414/ and email them at [email protected].