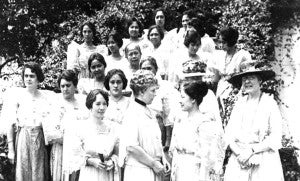 U.S. first lady Florence Harding received a group of women from the Philippines led by Sofia de Veyra, wife of the Philippine Resident Commissioner at the South Lawn of the White House on 19 June 1922. These women are the wives and daughters of the delegation, which came to Washington to present before President Harding the plea for Philippine Independence.

WASHINGTON, D.C. — An exhibit entitled “The Washington Home of the Philippine Suffrage Movement” opened on June 16 at the Philippine Embassy’s Romulo Hall, honoring the Filipinas who fought for women’s right to vote in their homeland.

“It is worth noting that Philippine society has always been blessed with strong and powerful women who shape the course of our history. Filipinas are active in diverse fields, pouring their talents, skill, and passion into many areas of human endeavor,” remarked Patrick Chuasoto, deputy chief of mission of the Embassy, as he formally opened the exhibit.

Chuasotot added: “It is therefore no wonder that the Philippine Suffrage Movement in the early 1900s was composed mainly of Filipinas who were able to carve an identity, and a mission, that were separate from those of the influential men in their lives.”

“The Washington Home of the Philippine Suffrage Movement” exhibit came from the research of husband-and-wife team Erwin Tiongson and Titchie Carandang-Tiongson, who also spearheaded the ongoing project Philippines on the Potomac or POPDC. It was an initiative of Mrs. Maria Victoria Cuisia, wife of Philippine Ambassador to the United States Jose L. Cuisia, Jr. Monique Bascon lent her artistic talent as exhibit designer. 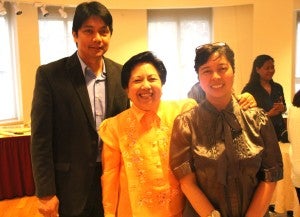 Husband-and-wife team Erwin Tiongson and Titchie Carandang-Tiongson with Mrs. Maria Victoria Cuisia (center) during the launch of the exhibit, “The Washington Home of the Philippine Suffrage Movement” held at the Romulo Hall of the Philippine Embassy. CONTRIBUTED

The exhibit focuses on the lives of Mercedes Tiongson Sandiko, Clemencia Lopez, Sofia de Veyra, Pura Villanueva Kalaw, Aurora Quezon, Ines Villa Gonzalez and Pilar Hidalgo Lim, who pursued their advocacy for the extension of suffrage to Filipino women during their stay in the United States in the early part of the 20th century.

“The exhibit celebrates a group of extraordinary women and their ties to Washington. And coming so soon after the last Philippine elections, this exhibit, we hope, serves to remind us that suffrage rights have been hard won through the struggles of many people who came before us. And by coincidence, that photo of the women from the Philippines at the White House, around which the exhibit is organized, was taken almost exactly 94 years ago today,” explained Titchie Tiongson.

“The exhibit draws materials from our Philippines on the Potomac Project. Discovering all these fascinating women and their ties to our adopted DC home has been a deeply rewarding experience. And the process of discovery has been made so much easier thanks to the generosity of so many people who shared memorabilia, photos, and family stories,” the Erwin Tiongson added.

The Embassy is hosting the weeklong exhibit in line with its Gender and Development (GAD) program and the commemoration of the 70th anniversary of Philippines-US diplomatic relations.

“We must remember that while diplomatic relations between our two countries turn only 70 years old this year, the ties that bind our nations have existed for over a century,” Chuasoto explained. “The Philippine Suffrage Movement had its own allies and supporters here at the US capital and we similarly honor their role in the Movement’s eventual success.” 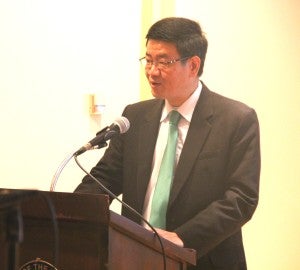 Deputy Chief of Mission, Minister Patrick Chuasoto delivers the welcome remarks at the launch of the exhibit, “The Washington Home of the Philippine Suffrage Movement” on June 16. CONTRIBUTED

The movement triumphed as the right of suffrage was extended to Filipino women on April 30, 1937. Almost eight months later, on December 14, 1937, the Philippines held the first general election in which Filipino women were allowed to vote and run for public office.

Mitzi Pickard, President of the Philippine Arts, Letters and Media Council (PALM), served as master of ceremonies at the exhibit launch.

Members of the public may view the “The Washington Home of the Philippine Suffrage Movement” at the Romulo Hall until 12:00 p.m. of Thursday, 23 June 2016, excluding Saturday and Sunday.

Read Next
Old is cool for this Fil-Am millennial
EDITORS' PICK
PH still at bottom of COVID-19 economic resilience ranking
TNT nears PBA crown after rout of Magnolia in Game 4
Work-From-Home is here to stay and requires reliable logistics
Renewal of driver’s license now requires taking LTO education seminar
Climate Change Commission and Nestlé PH to discover sustainability-focused solutions
Legarda emphasizes role of ICC/IPs in nation building this IP month
MOST READ
Drivers now required to take driver’s education upon license renewal – LTO
Marcos Jr’s ‘special diploma’ from Oxford: You can have it, too
Don’t do that: Robredo to supporters calling to boycott restos supportive of Marcos
OVP spox to Imee Marcos: Robredo is an extraordinary lawyer
Don't miss out on the latest news and information.