Only Filipina WWII US Silver Star recipient dies at 95 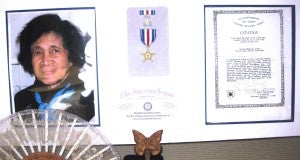 SAN FRANCISCO — Filipino WWII veterans and her family members mourn the passing of  Cpl. Magdalena Estoista Leones, 95, who entered the history books as the only Asian female to have been awarded the Silver Star in World War II for gallantry in action against an enemy of the United States. She died Thursday, June 16.

The US Silver Star medal is the third-highest honor for valor awarded to members of the US Armed Forces. Leones’ Silver Star citation states that she was an intelligence operative in the Philippines who, on Feb. 25 to 26, 1944 “repeatedly risked her life to carry important intelligence data, vital radio parts and medical supplies through heavily garrisoned enemy-held territory.”

Leones moved to California from the Philippines in 1969. She worked as a clerk at Pacific Bell, owned homes in Richmond and in San Jose and did not talk much about her war exploits, according to her offspring. 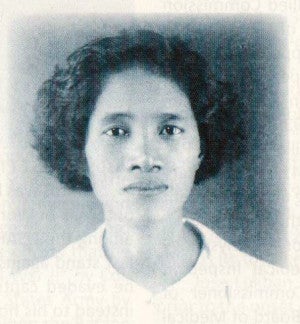 Magdalena Leones in her youth.

A Memorial service for Leones will be at Duggans Serra Mortuary in Daly City on June 25, 2016. Funeral are arrangements on hold pending approval by Philippine government to allow her burial at the Libingan ng Bayani in the Philippines.

To ACCOMPANY THE AWARD OF THE SILVER STAR

For gallantry in action at Luzon, Philippine Islands, from 27 February to 26 September 1944. During the period cited, Corporal Leones repeatedly risked her life to carry important intelligence data, vital radio parts and medical supplies through heavily garrisoned enemy-held territory. Although she knew that detection by the enemy would result in torture and execution, Corporal Leones fearlessly continued her perilous missions between guerrilla forces throughout Luzon with notable success. Through her intrepidity and skill as a special agent, Corporal Leones contributed materially to the early liberation of the Philippines.