THE Inquirer’s Day Desk chief, Michael Lim Ubac, has finished his master’s program at Harvard University with distinction, even getting an award for best thesis.

Ubac, who has been with the Inquirer for the last 19 years, brought home the “Director’s Prize for Outstanding ALM Thesis” for his timely research titled “Building Climate Resiliency in the Philippines: A Bottom-up Approach to Implementing Disaster Risk Reduction (DRR) Strategies  Through Analysis of the Impacts of Supertyphoon Yolanda in 2013.”

Ubac received his master of liberal arts (ALM) degree from the Harvard Division of Continuing Education, one of the 12 degree-granting institutions at the Ivy League school founded in 1636. Ubac was among only eight of the 780 plus graduates of the Harvard division who were awarded best thesis.

Accompanied by his proud 61-year-old mother, Arlina, Ubac joined 7,727 graduates who hogged the limelight in the 365th Harvard Commencement at Tercentenary Theatre on May 26.

The graduates were as diverse as they were unique, representing all 50 US states and 51 countries.

Ubac was the lone Filipino ALM graduate to join in the annual procession of graduates garbed in full academic regalia. The university commencement ceremony was held before an audience of 32,000 students, faculty, family members and guests. 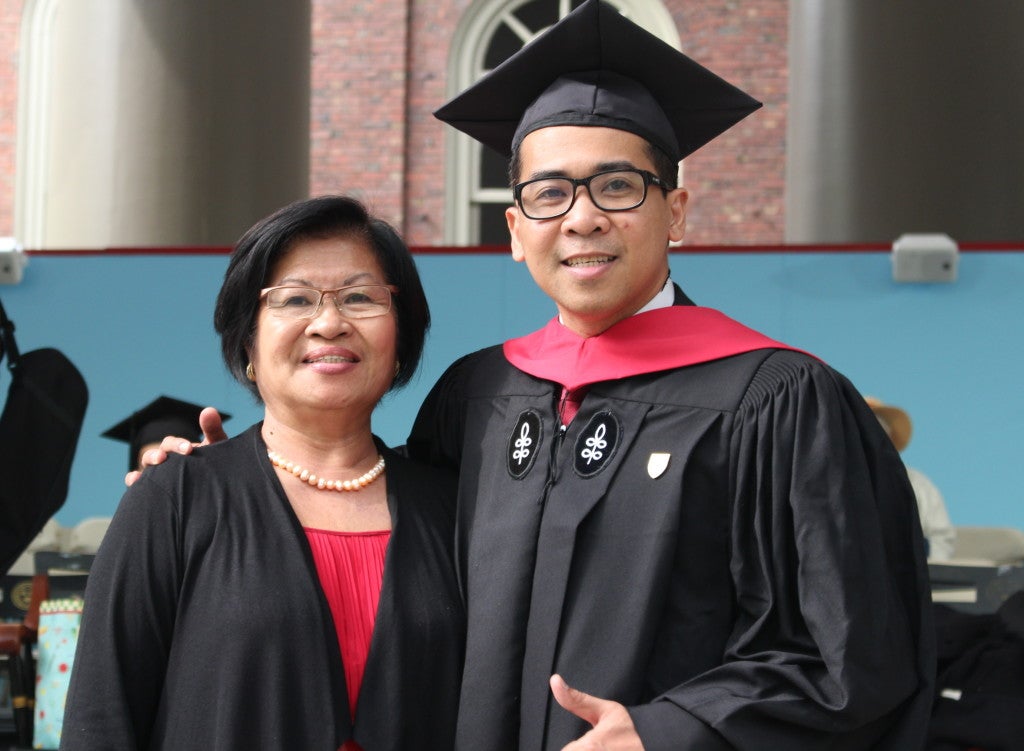 Michael Ubac poses with his proud mother, Arlina, at the 365th Commencement of Harvard University on May 26, 2016 at the university’s Tercentenary Theatre, where some 7,727 students—both undergraduate and graduate students–were conferred degrees during the morning exercise witnessed by an audience of 32,000.

Harvard Gazette, the university’s official news outlet, described the daylong ceremonies as a celebration of a “unique story of toil and triumph” at the university, with graduates “bonded by their Harvard experience and woven together in the splendid tapestry that is Commencement.”

An Inquirer scholar, Ubac rose from the ranks. As a reporter, he honed his journalism career covering the Supreme Court, House of Representatives, Senate and Malacañang under the Estrada, Arroyo and Aquino administrations. In 2014, he was promoted to the News Day Desk, first as assistant editor and later as chief managing the paper’s day-to-day news coverage.

He has won various awards, including the scoop award for the Inquirer from the Society of Publishers in Asia Awards for editorial excellence (2008), Louie R. Prieto Awards’ best scoop and best investigative story (2005 and  2006, respectively), Volunteer Against Crime and Corruption’s reporter of the year (2004) and a citation and commendation from the Office of the Ombudsman for his in-depth stories on official corruption (2002).

Ubac’s thesis studied climate change, zeroing in on the impacts of Yolanda (international name: Haiyan), the strongest storm to make landfall. The thesis tackled how climatic events can lead to a crisis situation in hazard-prone societies because of gaps in policy implementation and lack of preparedness.

READ: 2 years after ‘Yolanda’ / ‘Use imagination in disaster risk mgmt’

The study merited a thesis prize for being an outstanding graduate-level academic work in the field of international relations.

Charles J. Houston III told Ubac why his work was “judged to be worthy of this (Director’s) Prize.”

Houston is an academic adviser at the Office of Graduate Degree Candidate Advising and Program Administration of Harvard Division of Continuing Education.

Houston noted that Ubac’s thesis was nominated by Dr. Hilarie Cranmer, who found it an exceptional work for a master’s candidate.

Quoting Cranmer, Houston said Ubac’s thesis “distilled the complex and multifactoral response after Typhoon Haiyan by analyzing the policies, the actions, [and] the community resilience [that] helped in moving this vulnerable country, despite its poverty, from knee-jerk response to preparedness, thereby holding up the Philippines as a successful model for other at-risk countries and populations who are in the path of climatic change destruction.”

Cranmer, who served as Ubac’s thesis director, is an associate professor at Harvard Medical School and at the Department of Global Health and Population of Harvard T.H. Chan School of Public Health. She is also the director of disaster response of Massachusetts General Hospital Center for Global Health.

“I believe that Mr. Ubac is deserving of this award. Mr. Ubac has written a timely, comprehensive and impactful thesis that embodies the politics and the resiliency necessary to mitigate the effects of climate change in an increasing milieu of superstorms and their growing effects on populations at risk,” Cranmer said in nominating Ubac for the prize. 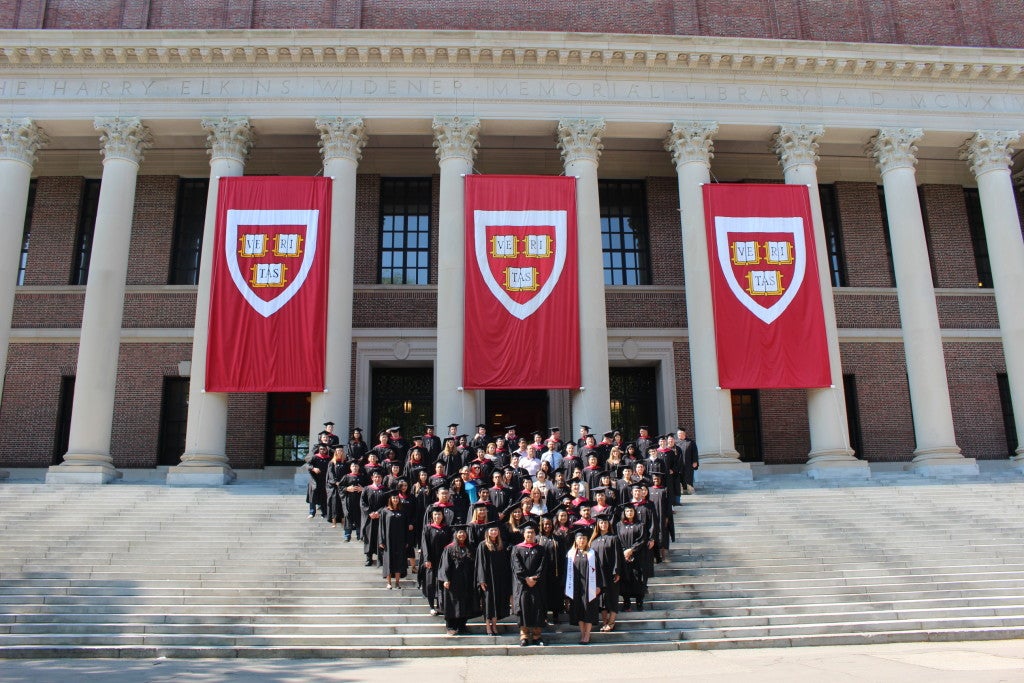 Class of 2016. Some of the Master of Liberal Arts (ALM) graduates pose for posterity on the steps of the famous Harvard Widener Library. Ubac is in front.

Ubac was thus handpicked by the faculty to share key insights of his research before the Harvard community on May 18.

He was one of the eight presenters at the 10th ALM Thesis Symposium conducted under the auspices of the Master of Liberal Arts Program in the Humanities and the Social, Biological and Behavioral Sciences.

The eight theses embodied the “highest level of scholarship and research work” in the ALM program for the previous academic year, according to the program. Most of the presenters received a thesis prize on May 26.

At the symposium, Ubac highlighted the lessons learned from the Yolanda debacle, particularly in Tacloban City and Leyte province, and the endemic DRR practices that resulted in zero casualty for the municipality of San Francisco on Camotes Island, Cebu province.

Ubac was among several Inquirer reporters who covered Yolanda and its aftermath.

“The age of climate change is both a challenge and an opportunity. Climate change is the biggest humanitarian crisis the world has ever seen because it forces us to confront the systemic perturbations that govern life itself,” Ubac said at the conclusion of his thesis presentation.

His research first reviewed the climate policy of the Philippines and its implementation before it compared and contrasted the level of resiliency of Tacloban and San Francisco, two coastal communities that bore the brunt of Yolanda, using morbidity and shelter factors as indicators. 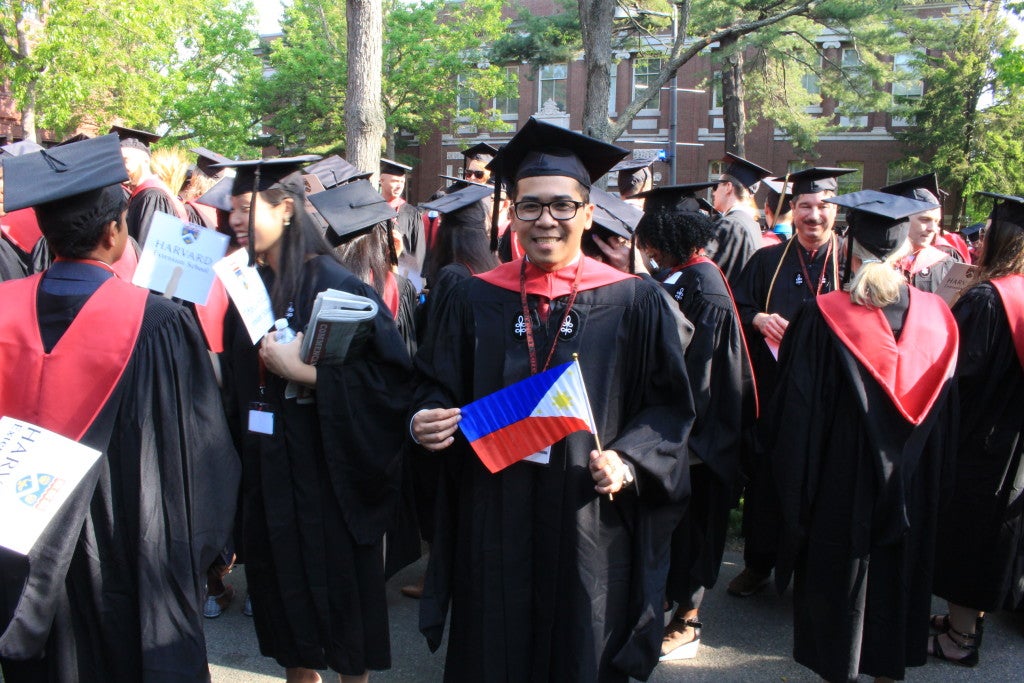 Graduates of the Master of Liberal Arts (ALM) program in full academic regalia await the Commencement processional of Harvard University on May 26, 2016. Michael Ubac is the lone Filipino in the program.

The study showed that climate change has placed coastal communities at higher risk of inundation, destruction and even societal paralysis, and thus the impetus for a holistic national strategy for DRR through a grassroots approach is crucial for building climate resilience.

Since households are at the forefront of mitigating the impacts of natural hazards, the country’s first line of defense is the robust engagement of local communities in implementing DRR programs and strategies, Ubac said in his thesis.

With the government providing the correct policy framework and adequate support system for mitigating risks, local communities will be placed in a much better position to respond and adapt to the impacts of climate change, according to the study. TVJ