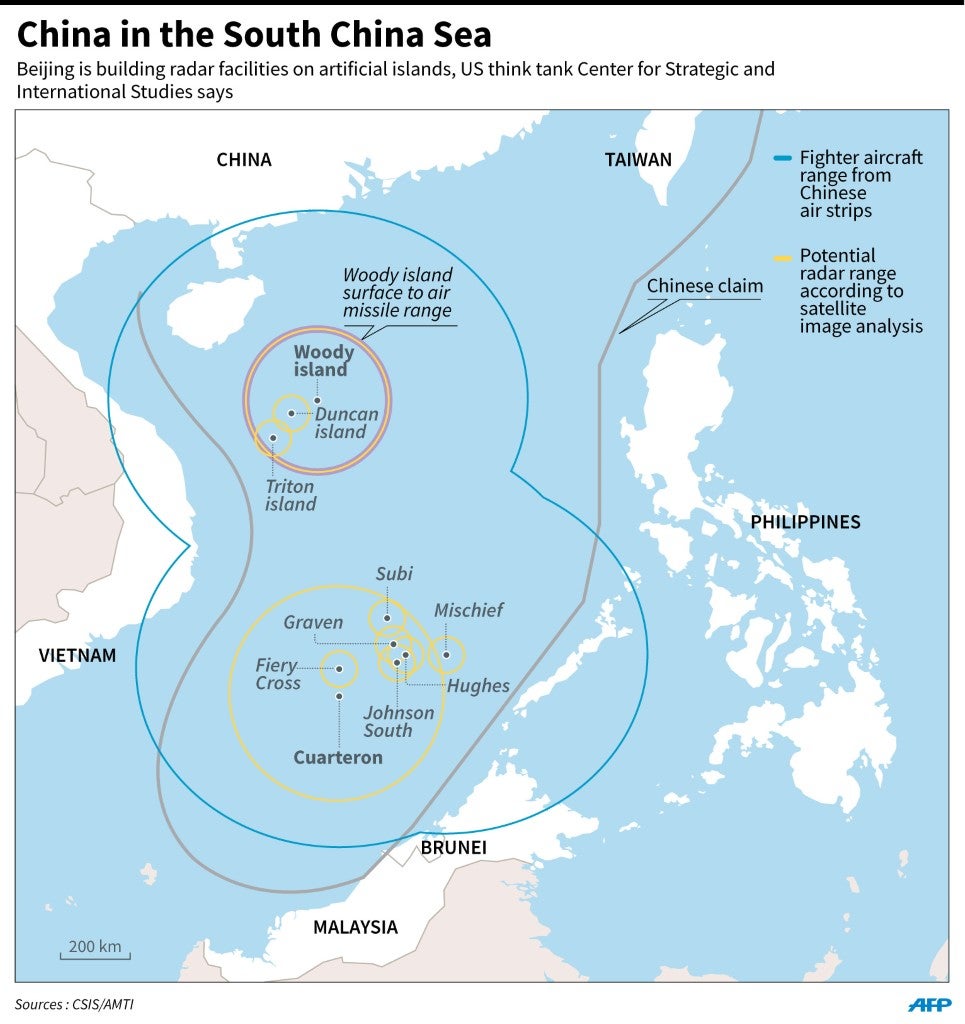 Map, released on February 2016,  shows potential Chinese radar cover in the South China Sea, according to analysis by US-based Center for Strategic and International Studies.  AFP

DIFFERENCES within the Association of Southeast Asian Nations (Asean) prevented the 10-nation bloc from issuing a tough statement on territorial feuds in the South China Sea after a meeting hosted by China this week, a Philippine official said yesterday.

Charles Jose, spokesperson for the Department of Foreign Affairs (DFA), told reporters the Asean foreign ministers’ failure to issue a joint statement after discussing the disputes with their Chinese counterpart, Wang Yi, prompted half of the bloc’s member states to issue their own individual statements.

All the ministers initially agreed on the text of the joint statement, Jose said, but some may have changed their mind later, preventing it from being issued publicly.

“This is actually an Asean media statement that was agreed on but somewhere along the way, after the meeting ended and most of foreign ministers left, it was not issued officially,” Jose said.

In the statement, the foreign ministers expressed “serious concerns over recent and ongoing developments, which have eroded trust and confidence, increased tensions and which may have the potential to undermine peace, security and stability in the South China Sea.”

China has opposed such language, which could provide the United States and its allies added justification to intervene in the disputes.

China claims almost all of the 3.5-million-square-kilometer South China Sea, including waters within the exclusive economic zones of its smaller neighbors in the region.

To bolster its sweeping claims, China has constructed artificial islands in the Spratly archipelago, topping some of them with airstrips that could receive military planes.

The disunity in Asean underscores the difficulty of resolving the disputes, which analysts fear could spark an armed confrontation in one of the world’s busiest waterway.

Founded in 1967, Asean decides by consensus, meaning just one member state can stall agreement on any issue.

It consists of a diverse collection of governments, including US-allied democracies and Chinese-aligned authoritarian states.

Four of its members—Brunei, Malaysia, the Philippines and Vietnam—are locked in the territorial disputes with China and Taiwan.

After the foreign ministers initially forged an agreement on the statement, Malaysia’s foreign ministry issued it to reporters, Jose said, suggesting that other member states later withdrew their approval for it to be publicly issued.

A senior Philippine diplomat said Laos, Cambodia and Burma withdrew their backing of the joint statement to avoid offending China, which later opposed its official issuance because of a lack of a consensus within Asean.

The diplomat spoke on condition of anonymity because of a lack of authority to discuss the sensitive issue with reporters.

Jose said it remained unclear whether the statement would no longer be officially issued, adding that amid the impasse, Indonesia, Malaysia, the Philippines, Singapore and Vietnam had gone ahead and released their own statements about the closed-door discussions, which took place between Wang and the Asean ministers on Monday to Tuesday in the southwestern Chinese city of Kunming.

Asked in Beijing whether China had objected to the statement, Chinese foreign ministry spokesperson Lu Kang did not answer directly, but said on Wednesday that China had been assured that it was not an official Asean document and had been retracted.

“If Asean wants to officially issue something that represents its stance, it should be agreed upon by all Asean members,” Lu told reporters, implying a lack of consensus within the grouping. AP